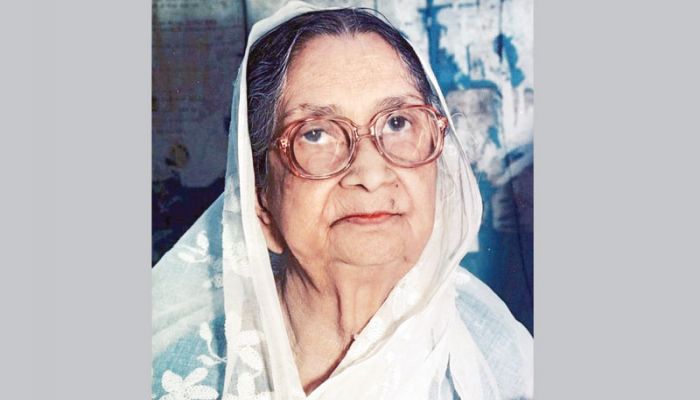 The 109th anniversary of the birth of the poet Sufia Kamal will be observed tomorrow virtually following the outbreak of the novel coronavirus (Covid-19).

A pioneer in the women's emancipation movement, Sufia Kamal was born on 20 June 1911 in  Nawab family of Shayestabad in Barisal.

During her childhood, women’s education was prohibited and she could not afford to get academic education.

In 1918, she went to Kolkata with her mother where she came to meet with Begum Rokeya.

She was first married at the age of 11 to her cousin Syed Nehal Hossain who was a law student.

They had a daughter, Amena Kahar.

In 1925, Kamal met Mahatma Gandhi, who inspired her to wear simple clothing.

Kamal’s first poem, Bashanti (Of Spring), was published in Saogat magazine in 1926. In 1931, she became the first Bengali Muslim female to be a member of the Indian Women Federation.

A short story Shainik Bodhu which Kamal wrote was published in a local paper in 1923.

In 1937, she published her first collection of short stories, Keyar Kanta (Thorns of the Keya Tree).

Her literary career began after her first poetry publication. Her first book of poems, Sanjher Maya (Evening Enchantment), was published in 1938, bearing the foreword of Kazi Nazrul Islam, and attracting praise from Rabindranath Tagore.

In 1947, Kamal became the founding editor of Begum, a weekly women's magazine published by Mohammad Nasiruddin.

She came to Dhaka in October of that year after the partition of India. During a huge clash between the Hindus and the Muslims of that time, Kamal worked for their friendship and joined the Peace Committee.

In 1948, when Purbo Pakistan Mohila Committee formed, she became its chairman.

Kamal 's advocacy began with the Language Revolution in 1952. In 1961, when Rabindra Sangeet (Songs of Rabindranath Tagore) was banned by the Pakistani government, she became involved in the Bengalis movement that followed in 1961.

During the mass uprising in 1969, which demanded the resignation of Pakistani military general Ayub Khan, she promoted the cause by forming Mohila Sangram Parishad (Women’s Struggle Group).

They did not see the oppression of women as simply a question of gender. She was also the first chairperson of BRAC (1972–1980).

Kamal was instrumental in getting the first women’s dormitory of Dhaka University to be named Rokeya Hall, after Begum Rokeya.

She died in 1999 and was the first woman to be given a state funeral in Bangladesh.