The Mouth of the Cave 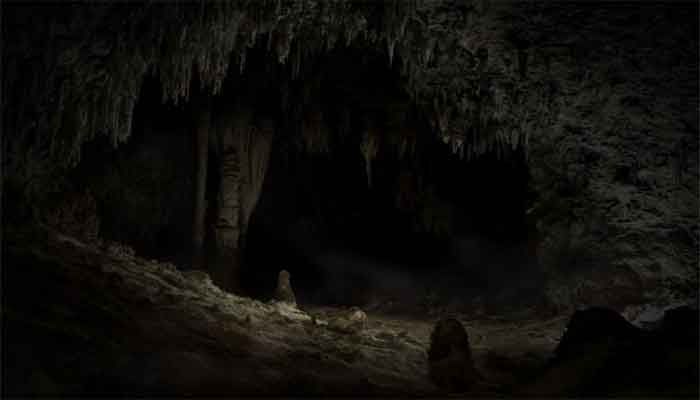 And it wasn’t the usual hunger it felt in the morning when it woke up, a hunger for something small like a rabbit or a toad or a tabby cat.

This hunger was something else.  The Mouth of the Cave could feel this hunger in its stalagmites and its stalactites, could hear it in its deepest sea caves and rock shelters, could touch it in its darkest grottos and most hidden caverns.  It was a hunger that whispered and pleaded and cried like a mother who had lost her only child and knew with a certainty that God would never give her another.

The Mouth of the Cave was that hungry.

It had been a long, long time since anyone like that had come upon it there in the place in the long, quiet valley where the two mountains brushed against each other like sleeping lovers in the dark night.

A month? A year? A hundred years?  The Mouth of the Cave grunted and gave a small groan.  Too long.

The Mouth couldn’t remember when the last man had come upon it and had fed its hunger.   It remembered only that the last one was a hunter, a boy more than a man, a boy in faded and torn leather that had been given to him by his father when his father was dying.

This boy who was not even a man had been in the forest with his own hunger, not a hunger for food but for something else.  He thought it was a deer that brought him searching through the forest around the cave, but it wasn’t.

The boy didn't find the deer, but there was something about the Mouth that drew him down to it, down to its darkest grottos and most hidden caverns

The Mouth of the Cave wondered what it was that drew the hunter. It didn’t know why the boy came, or why any of those who came to it came.  It didn't understand people, didn’t understand why they came.

The Mouth of the Cave didn't know, and finally, it didn't care why the boy and the others, all the others came. Not really.

All the Mouth of the Cave knew was that it was hungry, and it didn't like to be hungry.  The Mouth didn’t understand the men and women who came looking for it, but it understood the hunger it felt, and the Mouth remembered how the boy in torn and faded leather helped lessen the hunger.  For a while.

The Mouth of the Cave groaned then and then groaned again and again, and the groan became softer each time the Mouth groaned until its silent groans filled the entire valley with its hunger.

Far far away, an old farmer heard the groaning, and even though he didn’t understand it, he felt something stark and wonderful in his heart, and he dropped his rake in the early summer field and listened.  After a moment, he turned to where he thought the groan came from and started walking toward it quickly.

He didn’t think about his wife who was working in her kitchen washing the strawberries he had bent over and picked this morning.  And he didn’t think of the son who he had last seen shoeing the old mare in the stable that leaned against the house the old farmer had built thirty years ago when he was first married and his wife still smiled at him when he whistled to the cow to come to the house for the milking.

The old farmer felt something.  It was something he never felt before, not even when he was a boy and first feeling the stirrings of what it meant to yearn and need.  He didn’t know what to call it, this yearning.  Was it a craving, a hunger, a hankering, a desire, a wanting?

He didn’t know.  They weren’t words he used often, or ever used really.  He was a man who woke early to care for the chickens and drive the plow through the fields, and he was a man who worked till the darkness looked at him and said, “Now, it’s time for bed.”  But most of the time the old man lived without words and lived without the thoughts and feelings the words sometimes conveyed.

But now – now he heard the soft groaning somewhere far away in the shadows of the mountains, and he felt something, some hunger or thirst, and he knew he had to follow it to the Mouth of the Cave.

The old man walked toward it like it was spring.