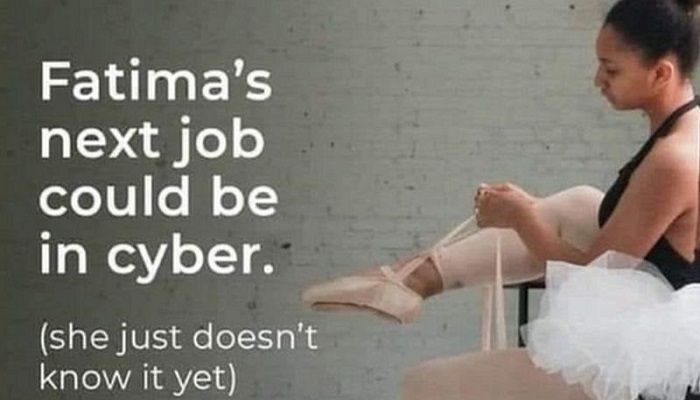 ﻿A US photographer has said she was "devastated" when one of her photos was used for a UK government-backed advert suggesting a dancer should retrain.

The ad was criticised for encouraging "Fatima" to give up on dancing and "reskill" in cybersecurity.

The dancer is actually called Desire'e and the photo was taken by Krys Alex.

"I was shocked," the Atlanta-based photographer said in a YouTube video. Artists "should not be encouraged to stop doing what we love", she added.

The ad was pulled after Culture Secretary Oliver Dowden disowned it, describing it as "crass". A 10 Downing Street spokesperson agreed that it was "not appropriate".

The first Alex knew of her photo's use was when the advert began to be criticised on social media.

"I woke up Monday morning to a bunch of emails and tags, and I really felt devastated," she said. "I immediately thought of Desire'e and how her face was just plastered all over social media and the internet, different news articles, and memes were created, and she had no clue. All of that really hurt me.

"Some people questioned if I knew and if I approved the use of my work. If I'd have know that this was going to be used in the way it was, I would have never agreed to it."

Desire'e Kelley is "a young, talented and beautiful aspiring dancer from Atlanta", she added.\ "We're exploring all our options and we're talking and consulting with different professionals to figure out the best way to protect our rights in this situation."

The photo was available on stock image site Unsplash, whose licence says pictures can normally be downloaded for free for commercial and non-commercial purposes.

The campaign, which also features images of people from other walks of life, was created for CyberFirst, which is described as "a government outreach and education programme run by the National Cyber Security Centre (NCSC), part of GCHQ".

The original photo also included Tasha Williams, owner of the Vibez in Motion Dance Studio in Atlanta, Georgia. She was cropped out for the ad.

Writing on Instagram, Williams described the advert as an "unforgivable act".

She said: "I can remember growing up hearing, 'Dance is art, it's not a career just a hobby, make sure to get a real job and dance on the side.' The UK campaign took me right back to that place mentally, which was a bit scary.

"Being about 11 or 12 and feeling like I had to be someone I wasn't and suppress my creative energy to satisfy what 'others' saw as productive lives."

Mr Dowden again distanced himself from the advert when he was asked about it by MPs on the House of Commons culture select committee on Wednesday.

"I was at the Royal Ballet just on Friday and it was wonderful to see artists perform again. I know the huge value they bring to this country," he said.

He cited grants awarded this week from the Culture Recovery Fund to institutions including the Royal Academy of Dance and Birmingham Royal Ballet. "We know those are jobs that should be preserved," he said.