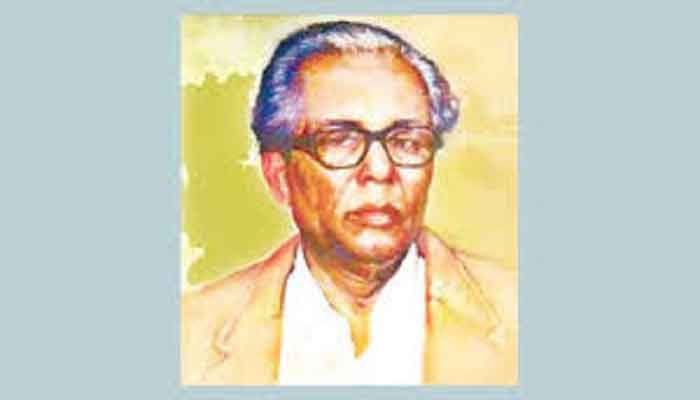 The 106th anniversary of the birth of the art maestro Zainul Abedin is being celebrated today (Tuesday).

The artistic genius was born in Kishoreganj on December 29, 1914, and became the man behind the establishment of the Dhaka University Faculty of Fine Arts and the Folk Art Museum in Sonargaon, Narayanganj.

His birth anniversary is being celebrated with a limited number of programmes owing to the current COVID-19 pandemic. The Faculty of Fine Arts of Dhaka University will plan a virtual version of today's Zainul Festival.

The virtual event, including the placement of a floral wreath by the vice-chancellor and faculty members of Dhaka University at 10 am at the Shilpacharya grave, accompanied by a virtual photography and art exhibition on the life and works of Zainul Abedin, was broadcast on the website of the Fine Arts Faculty at www.fineart-du.com.

There will also be a virtual exhibition in collaboration with ARTCON in 3D Virtual Reality technology, featuring works by the prominent artists of the subcontinent along with the artists from the Faculty of Fine Arts, Dhaka University.

Zainul, historically known for his drawings of the Bengal famine in 1943, developed his talent for painting on the banks of the Brahmaputra River during his youth. In 1932, he completed his degree from the Government Art School, Kolkata. He left Kolkata and returned permanently to his motherland, Bangladesh (then East Pakistan), soon after the partition of the Indian subcontinent in 1947.

Zainul then worked actively to develop the Dhaka Art Institute, becoming its principal in 1949. Later, the institute becomes the Faculty of Fine Arts today.

In the then East Pakistan, the institute became the centre of fine arts activities and actively engaged under Zainul's artistic leadership in historical founding events of independent Bangladesh, such as the 1952 Language Movement and the 1971 Liberation War.

He willingly went on retirement from the Dhaka Art Institute in 1967 and was conferred the honorary title of Shilpacharya (great master of fine arts) by the institute.

Zainul received a two-year training from Slade School of Fine Art in London and began a new style of art called the 'Bengali style' featuring folk art forms with their geometric shapes including the usage of semi-abstract representation and primary colours. However, he lacked the sense of perspective, realising the limitations of folk art, and went back to nature, rural life and the daily struggles of people to make art that would be realistic but modern in appearance, thus being the pioneer of modern artistic style in the subcontinent.

In 1970, he visited Palestinian camps in Syria and Jordan and made 60-70 refugee paintings there, adding yet another instance to his caliber as a modern, international artist.

Known for the simple yet majestic projection of natural and social hazards, Zainul painted the 1970 Bhola cyclone that devastated then East Pakistan, portraying the effect of the cyclone through his painting ‘Monpura’.

As a fond lover of folk arts, Zainul formed Charu O Karu Shilpi Sangram Parishad and also collected a large number of traditional crafts, ceramic works, and nakshi kanthas in his lifetime which he preserved through founding the Folk Art Museum at Sonargaon, Narayanganj in 1975.

He also founded the Zainul Abedin Sangrahashala, a gallery of his own works at the Shaheeb Quarter Park on the bank of Brahmaputra River in Mymensingh the same year.

“Shilpacharya Zainul Abedin has cemented his legacy as the greatest artist of Bangladesh who got himself ecologically balanced in riverine Bangladesh. He portrayed the nature of Bengal through his imaginative inner eyes that explored more than outer vision,” renowned art critic Moinuddin Khaled told media.

Further explaining with examples, he added, “Many of us know about the infamous 1943 famine in the greater Bengal which happened due to the heinous acts of the British government, and we know about the havoc of that period because of Zainul’s artworks which perfectly portrayed the social situation at that time.”

In 1973, Zainul received an honorary D.Litt from Delhi University. He was declared National Professor of Bangladesh in 1975. NASA honoured the iconic artist through naming a crater on the planet Mercury after the painter, called the 'Abedin Crater' in 2009.

Shilpacharya Zainul Abedin passed away on May 28, 1976 after suffering from lung cancer.