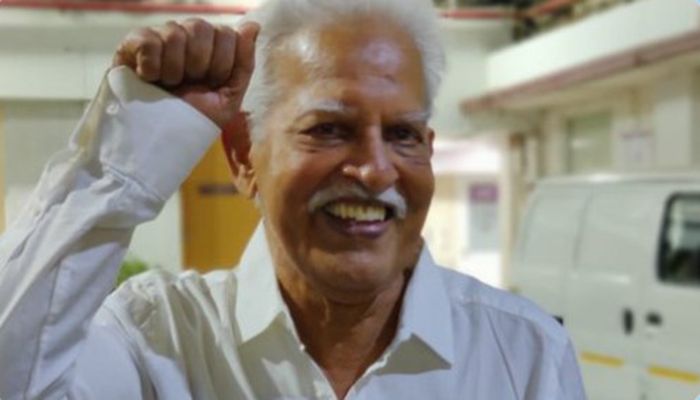 Indian poet and activist ﻿Varavara Rao (81) who has been in jail for over 2 years in the Koregaon-Bhima case, walked out of Mumbai's Nanavati Hospital late Saturday after being granted bail for six months by the Bombay High Court on medical grounds last month.

He was undergoing treatment at the hospital where was admitted by the Maharashtra government following the high court's intervention. His lawyer Indira Jaisingh posted a photo of the poet-activist on Twitter.

Mr Rao has been asked by the court to remain in Mumbai and be available for investigation whenever needed. He will also have to submit his passport before the NIA (National Investigation Agency) court, and he has been forbidden to establish any contact with his co-accused in the case. He has to submit a personal bond of ₹ 50,000 and two sureties of the same amount.

The high court on February 22 said if it did not grant Mr Rao medical bail, it would be abdicating its duty to protect the principles of human rights and a citizen's fundamental rights to life and health.

"We are relieved. It is a big relief for us. Because for the last 2.5 years, no one was getting even a small relief in this case. This is the first relief in the BK (Bhima-Koregaon) case. We are very happy but the condition is there that we have to be in Mumbai. We have to think about that and plan. We will talk to the lawyers," Mr Rao's daughter Pavani said.

Last month, Indira Jaising highlighted his poor health condition before the Bombay High Court, saying that of the 365 days since last February, he spent 149 days in hospital. She urged the court to let Mr Rao out of Maharashtra's Taloja prison where he is lodged as an undertrial and to permit him to go home and stay with his family in Hyderabad.

PromotedListen to the latest songs, only on JioSaavn.com

The case, being probed by the National Investigation Agency, involves allegations of provocative speeches made at the Elgar Parishad conclave held in Pune on December 31, 2017, which the police claimed led to violence the next day near the Koregaon-Bhima war memorial.

Varavara Rao and nine other activists were accused of plotting the violence with Maoists. Mr Rao, who headed "Veerasam", an association of revolutionary writers, has strongly denied the charge.