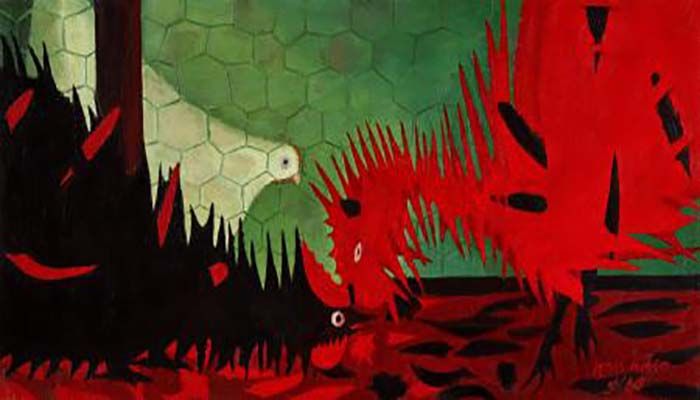 ﻿﻿﻿For Abidjan-based artist Saint-Étienne Yéanzi, the continent's social and political reality has sparked a creative evolution for contemporary African artists, he says, giving them confidence to work and stay in Africa.

The contemporary art market in Ivory Coast and across sub-Saharan Africa has captured collectors' imaginations on a global scale, translating into profits for many artists like Saint-Etienne. He says the average value for individual pieces of his work increased from roughly around $8,000 to $60,000 in his seven years as an artist.

Perhaps the biggest example of this exponential growth is Ivorian rising star Abdoulaye Diarrassouba, better known as Aboudia. "He is one of those artists that has evolved well in recent years," says gallery owner Cécile Fakhoury, who opened her gallery in Abidjan, Ivory Coast in 2012 and has witnessed the ways Aboudia's vibrant style of graffiti-like painting -- reminiscent of the works of the late Jean-Michel Basquiat -- has propelled his career.
"Today, the paintings we see here (in the gallery) are between $47,000 and $180,000," she adds.
In May, Aboudia's "Untitled (2015)" sold for $232,000, a whopping 835% over presale valuation estimates and shattering his personal record set last year.

Other established African artists from Ethiopia, Zimbabwe and Nigeria recently grabbed international headlines at the bi-annual Sotheby's Modern and Contemporary African art auction in London. Renowned Nigerian artist Ben Enwonwu's "Atlas" sold for over half a million dollars at a Sotheby's auction in March, setting a new world record for an African sculpture.

Record-breaking art
"2020 was our most successful year yet", says Hannah O'Leary, Sotheby's head of modern and contemporary African art. Despite being virtual due to the pandemic, last October's event sold over $4.4 million of art.
In March, Sotheby's again exceeded presale estimates by 40%, selling $3.7 million worth of art from 34 countries. O'Leary says that since the African art auction's inception in 2017, the company has broken 90 world records.

"Every time we break one of these records, we are setting new standards and elevating the reputation of our artists,'' she adds.