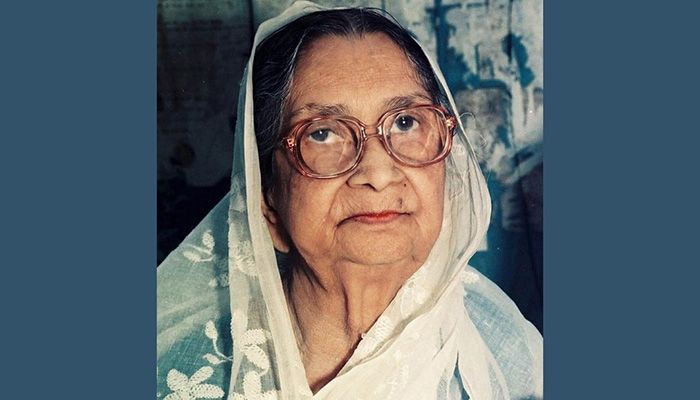 The 22nd death anniversary of poet Begum Sufia Kamal is being observed today with holding different programmes including milad mahfil, placing of wreaths at her grave and discussion.

They prayed for eternal peace of the departed soul of Sufia Kamal terming her a pioneer of democratic, socio-cultural and women's freeing movement.

In a message, the President said Poet Sufia Kamal will be alive among the countrymen through her literary talent and amazing works.

"Her ideals and literary works will inspire the new generation deeply to build an exploitation-free and non-communal society," the head of the state said.

He said Poet Sufia Kamal was a pioneer of the women's movement and a fearless fighter against sectarianism and bigotry.

She has struggled all her life to free women from the shackles of ignorance and superstition, the President added.

Abdul Hamid said she was active in every movement of democracy and human rights, including the great language movement, the War of Independence and the War of Liberation.

She was one of the initiators of the movement for the trial of crimes against humanity committed by the anti-Liberation forces during the war of liberation, the President added.

"Sufia Kamal had struggled for establishing a society with equal rights of men and women," he said, adding, "She was called 'Janani Sahosika' for her contribution to the country's democratic, social and cultural movements.

In her message, Prime Minister Sheikh Hasina conveyed her profound respect to the memories of Begum Sufia Kamal, one of the pioneers of progressive, democratic and women emancipation movements in Bangladesh.

The premier said the creativity of Begum Sufia Kamal, one of the poets of Bengali literature, was unforgettable.

Sufia Kamal, a pioneer of women's awakening, was a portrait of Bengali woman and a loving mother, and also on the other hand she was very active with her uncompromising and steadfast footsteps in every movements and struggle of the country, Hasina mentioned.

The prime minister said her direct presence in the education and cultural movement, including the Language Movement of 1952, the mass uprising of 1969, the non-cooperation movement and Liberation War of 1971 and various democratic struggles in the Independent Bangladesh had earned her the title of 'Janani Sahosika' of the people.

The ideals and examples set by the poet Sufia Kamal would continue to be a source of inspiration for Bengali women of all ages, she added.

The prime minister said Sufia Kamal's role had inspired the pro-liberation forces when the distortion of history began in the country after the assassination of the Greatest Bangalee of all times Father of the Nation Bangabandhu Sheikh Mujibur Rahman in 1975.

She hoped that the new generations will be imbued with patriotism through reading the literary works and life of Poet Sufia Kamal. Born on June 20, 1911 in an aristocratic family, known as the Nabab family of Shayestabad in Barishal, Begum Sufia Kamal dedicated her whole life to the promotion of women liberty, progressive thinking and non-communal politics.

She was an activist of the historic Language Movement of 1952 and also played a significant role in the Great War of Liberation. She was also an excellent organiser. In 1956, she organised "Kochi-Kachar Mela", an organisation of children, and organised the Bangladesh Mohila Parishad in 1970.

Begum Sufia Kamal died in Dhaka on November 20 in 1999 and was buried at Azimpur graveyard with full state honour.