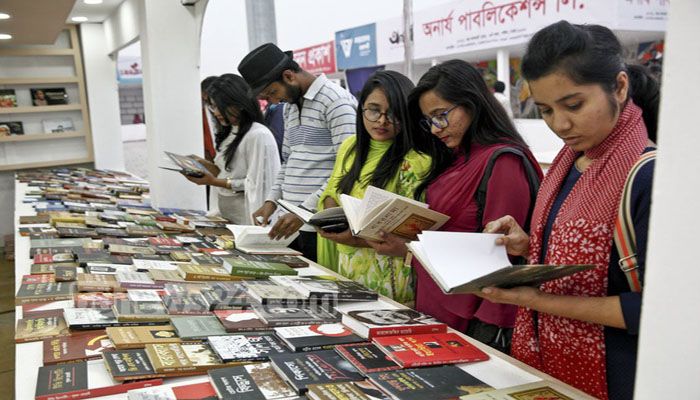 Stalls of Bangla Academy have drawn the attention of book lovers as around 76 categories of publications ranging from literature to history to philosophy are on display at its six stalls at the Amar Ekushey Book Fair, reports media.

"The sales are satisfactory from the very beginning of the fair . . . our stalls are attracting visitors from children to adults due mainly to our different types of publications," said Jalal Ahmed, Bangla Academy's Director of Sales, Marketing and Reprinting Division and Member Secretary of Amar Ekushey Book Fair organising committee.

As of now, Bangla academy has published 101 books-28 new ones while 73 reprinted. Six more will also be published at the book fair. Of the 107 books, 44 books are on this year's fair's theme "Golden Jubilee of the Liberation War, the birth centenary of Father of the Nation Bangabandhu Sheikh Mujibur Rahman and Language Movement".

"Five more books will also be published in the fair, if it is extended up to March 17. However, we hope that we will be able to publish the rest of the books by the next year," said Mubarak Hossen, Director of research, compilation, and dictionary and encyclopedia department of Bangla Academy.

"Books on Bangabandhu Sheikh Mujibur Rahman, liberation war, language movement, academic and job related books like dictionaries and encyclopedias, are being sold much," said Mintu Sutra, manager of one of the stalls of Bangla Academy.

While visiting the stalls, people were seen gathering and making crowd at the stalls while the stall attendants were seen busy in describing the features of different books and selling.

Since its establishing, the Academy had published 5,390 books till February 2022.

There are six stalls of Bangla Academy to exhibit and sell books on Book Fair, where two were located to Bangla Academy premises and others four were SuhrawardyUdyan.

The book fair will remain open for all from 2 pm to 9 pm on working days and 11:00 am to 9 pm on public holidays with a one-hour break for lunch and offering prayers till February 28.

Last year, a total of 834 stalls were allocated in favour of 540 organizations.