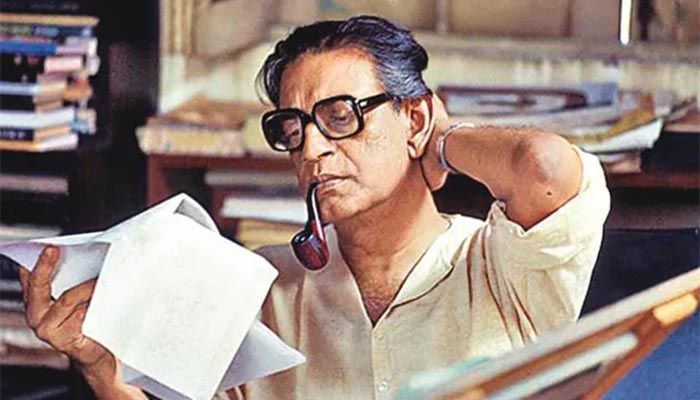 ﻿﻿Satyajit Ray, the legendary Indian film director, marks his 101st birth anniversary. Ray was born on this day and was responsible for numerous classic films in Indian cinema.

Satyajit Ray, who was born on May 2, 1921, is considered to be one of the greatest directors in the country. His talents extended beyond that of a successful director to include those of a superb writer, artist, painter, film producer, lyricist, and costume designer, amongst others.

Today is birth centenary of master film maker #SatyajitRay. Born on 2nd May, 1921, Ray is regarded as one of finest filmmakers the world has ever seen. He created cinematic masterpieces like 'Pather Panchali', 'Charulata' and 'Devi'.

Pather Panchali, Aparajito, Apursansar, and Charulata are just a few of the films he has provided to the cinema industry that is remembered fondly. He had a total of 37 films to his credit during his lifetime, which helped him to become well-known all over the world.

We respectfully remember Satyajit Ray (2 May 1921 – 23 April 1992) on his birth anniversary. He remained critical of the type of capitalism evolving here and made explicit his aversion to the greed and the anti-humanist and pro-technology biases of the system. #SatyajitRay pic.twitter.com/Ff0HPfhV2v

Satyajit Ray, a prominent contributor to Indian cinema, developed an interest in films following a trip to England in the 1960s. During the month of April 1950, Ray and his wife embarked on a journey to London, England. An international advertising company was hiring Satyajit Ray at the time of his departure from India. To have a better understanding of the task, the company sent Ray to the company’s London headquarters for a six-month stint.

After seeing Bicycle Thieves in London, he was inspired to pursue a career as a filmmaker. He watched over 100 films when he was in London. Pather Panchali was Satyajit Ray’s first film. The Cannes Film Festival also praised his film. The majority of Satyajit Ray’s films were made in Bengali.

After Pather Panchali, an officer of Govt asked #SatyajitRay whether showing such poverty on celluloid would not bring India to disrepute in the eyes of the world. Ray said,if it is not disreputable for you to tolerate such poverty, why should it be disreputable of me to show it? pic.twitter.com/a6A13yycCx

“Pather Panchali” won many honors. Then he made ‘Shatranj Ke Khiladi’ in Hindi. It is a classic Hindi film. Satyajit Ray is known as the best filmmaker of Indian cinema. Satyajit Ray was admired by Francis Ford Coppola, director of ‘The Godfather’. Ray’s first film was hailed globally but criticized in India.

“The only solutions that are ever worth anything are the solutions that people find themselves.”
Remembering the legend on his 101th birth anniversary. ???????? #SatyajitRay #satyajitray100 pic.twitter.com/VbuhFp17Td

Ray had presented the true India in this film, which was well-received internationally but not in India. The film praised India’s poverty. Especially in this, the West Bengal situation was exposed. The Government of India awarded Satyajit Ray 32 National Awards for his outstanding contribution to Indian cinema. Not only that, but he received a special Oscar for his contributions to cinema. The committee chairman personally came to India to present this distinction to Ray, who was sick at the time.

Ray of inspiration
Ray of uniqueness
Ray of artistic excellence
Ray of light...which shines through only once, in a ???? years
Birth anniversary of the Maestro,
Sri #SatyajitRay ...
(Photo courtesy: Shri Raghu Rai) pic.twitter.com/STCnunghXb

Happy Birthday to one of the greatest ever born whose works are timeless & till date continue to be a studybook for filmmakers. With every re-watching of his films, a new window of thoughts get opened every single time. India's greatest gift to the World of Cinema #SatyajitRay pic.twitter.com/DCVXvZnrD0