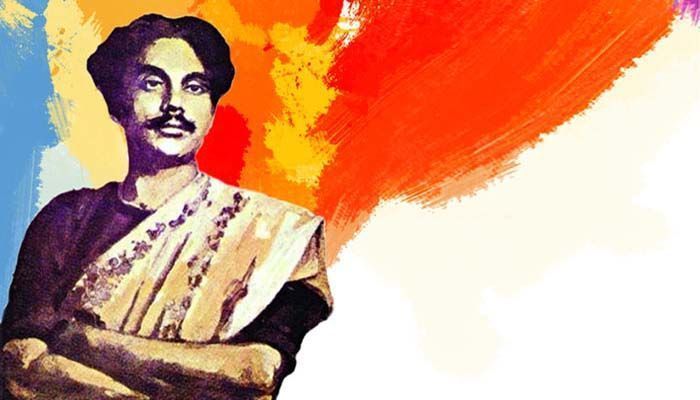 ﻿﻿The 123rd birth anniversary of national poet Kazi Nazrul Islam is being celebrated in the country today in a befitting manner.

Known and regarded as the ‘rebel poet’ for his iconoclastic and majestic literary creations, Kazi Nazrul Islam was born at Churulia village of Burdwan in the Indian state of West Bengal in 1899.

Nazrul through his fiery poems had inspired people to fight against injustice and repression of the colonial rule.

Aiming to observe the glorious day amid festivities without the fear of COVID-19 for the first time in two years, the maximum number of government and non-government organizations and different cultural platforms chalked out separate programmes with cultural performances and discussions on the life and works of the rebel poet.

This year, the government has announced the theme of the birth anniversary celebration of the national poet as the “Rebel’s Centenary.”

According to the Ministry of Cultural Affairs, the events observing the 123rd birth anniversary of the national poet will begin with placing floral wreaths at the grave of the poet at Dhaka University at 6:30 am.

State Minister for Cultural Affairs KM Khalid and Secretary Abul Mansur will be present on the occasion alongside other officials of the Ministry and its associated wings and departments.

Information and Broadcasting Minister Dr Hasan Mahmud will be present at the opening ceremony as the chief guest, which will also be joined by Nazrul’s granddaughter Khilkhil Kazi as a special guest.

Country’s leading cultural institution Chhayanaut is set to organize a two-day "Nazrul Uthsab '' from May 25 at the Chhayanaut Sangskriti Bhaban, Dhanmondi in the capital.

This year, the event is welcoming in-person attendance for the first time in the last two years, and the festival will be featuring performances inspired by Nazrul's literature and songs at Chhayanaut's auditorium at 7 pm. The festival will also be aired on Chhayanaut's official Facebook page and YouTube channel.

Posts and Telecommunications Minister Mustafa Jabbar was present as the chief guest at JKKNIU’s Gahi Sammyer Gaan Mancha on the first day’s event at 11 am. Vice-Chancellor Prof.Soumitra Shekhar chaired the event, which was also joined by Poet Muhammad Nurul Huda, Director General of Bangla Academy as the special guest.

On the occasion, eminent Nazrul sangeet exponent Sujit Mostafa was awarded with the Nazrul Padak.

Many other organizations and institutions including Bangla Academy, Bangladesh Shilpakala Academy, Kazi Nazrul Institute and more will be organizing special events, marking the 123rd birth anniversary of the poet.

Newspapers will publish special supplements on the occasion.

According to the Nazrul Institute, Kazi Nazrul wrote 2,600 songs, 600 poetry, three novels, and 43 articles in a career spanning 21 years before losing his speech.

After the death of his father, Kazi Nazrul obtained a job as a caregiver and also worked as a muezzin at a mosque to support his family. At the age of nine, he had to drop out of school to join a Churulia-based professional ‘leto' company.

He was introduced to Bangali and Sanskrit literature while working for the group. He returned to school a year later and enrolled at Matharun English School, but dropped out again in Class VI due to poverty.

After a while, police officer Kazi Rafizullah took him in at his home in Trishal, Mymensingh, and enrolled him in Class VII at Darirampur School.

Serving the British Army in 1917 as a soldier, Kazi Nazrul started his literary career within a few years. His cult-classic poem ‘Bidrohi’ (The Rebel) was published in 1921. A year later, he started a fortnightly magazine named ‘Dhumketu’ (The Comet).

His nationalist participation in the Indian Independence Movement landed him in the hands of colonial British authorities on several occasions.

While in prison, Kazi Nazrul authored the 'Rajbandir Jabanbandi' (Deposition of a Political Prisoner), and his creations later encouraged Bangladesh Liberation War. He was against all sorts of religious, caste-based, and gender-based discrimination and extremism.

He wrote short stories, novels and essays, but his songs and poems are his most critically acclaimed literary creations. He popularised Bengali ghazal melodies, and is noted for his liberal usage of Arabic and Persian terms in his writings.

Kazi Nazrul created a new genre in music called ‘Nazrul Geeti’, a collection of 4,000 songs that he wrote and created the music for, many of which were recorded on HMV.

In 1942, Kazi Nazrul began to lose his voice and memory due to an unexplained ailment. Later, a medical team in Vienna identified his illness as Pick's disease, a rare and incurable neurodegenerative disease.

His family travelled to Bangladesh at the invitation of then Bangladeshi government and settled down in Dhaka in 1972. For his iconic contribution to Bangla literature and culture, Dhaka University awarded him an honorary post-doctoral degree in 1974. He was awarded Ekushey Padak in 1976.

President Abdul Hamid and Prime Minister Sheikh Hasina issued separate messages highlighting the colourful life of the poet and his contributions to Bangla language and literature.

In his message, the President said, “Nazrul’s write-ups inspired us in all democratic movements including the anti-British movement, the Language Movement, the Mass Uprising in 1969, and the Liberation War.”

“I firmly believe that the new generation will be able to enrich themselves through the practice of Nazrul and will play a role in building a happy and prosperous ‘Sonar Bangla’ with patriotism and honesty.”

In her message, the Prime Minister said, “I believe Nazrul's write-ups will play a role in building a non-communal, peaceful, happy, prosperous and modern Bangladesh.”

She also wished success of all programmes marking the day.-UNB