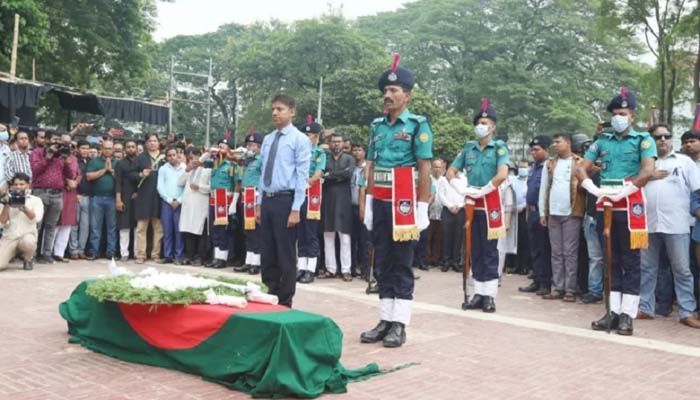 Abdul Gaffar Chowdhury was given a guard of honour|| Photo: Collected

﻿The body of Abdul Gaffar Chowdhury, author of Amar Ekushey Sangeet, eminent journalist, writer and columnist has been taken to the central Shaheed Minar to pay homage to people of all walks of life.

He was given a guard of honour there. At the same time, the President, the Prime Minister, the Speaker of the National Assembly and various political parties, social organizations and the general public are paying their last respects to this man.

Earlier on Saturday (May 28) at around 11 am, the body of Gaffar Chowdhury arrived at Hazrat Shahjalal International Airport in Dhaka from London on a Bangladesh Airlines flight.

It is learned that after paying homage to people of all walks of life, Janaza will be held at 3 pm at the Central Jame Mosque of Dhaka University. His body will then be taken to the National Press Club. Later, according to his wishes, he will be buried next to his wife's grave in the Martyred Intellectual Cemetery in Mirpur.