Humayun Ahmed Being Remembered On His 10th Death Anniversary 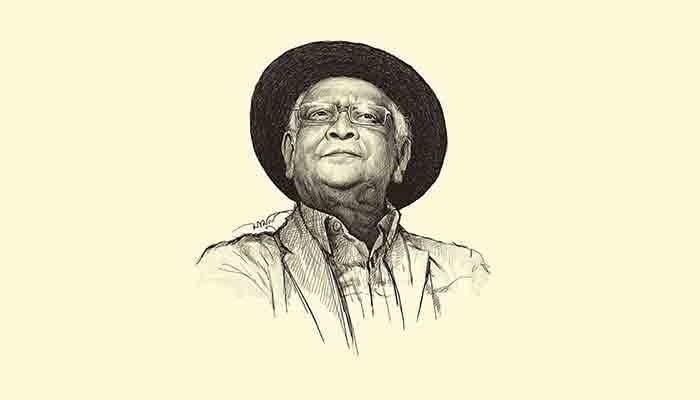 The legendary litterateur passed away on 19 July, 2012 due to colorectal cancer at the age of 63 at Bellevue Hospital, New York, in the United States.

Commemorating the death anniversary, his family and several organisations are observing the day with different programmes and events.

Humayun Ahmed’s widow and actress and singer Meher Afroz Shaon, alongside their two sons Ninit and Nishad, placed floral wreaths at his grave at Nuhash Palli, Gazipur in the morning.

Special prayers and Quran Khatam were organised in the morning, and a prayer ceremony was also held to seek the forgiveness of his soul. Orphans will be fed at noon marking this occasion, according to both Shaon and the authority of Nuhash Palli.

Himu Paribahan, a renowned fan unit of the prolific litterateur, has been observing this special day since 2013. Members of the platform placed floral wreaths at the writer’s grave in the morning.

The Kishoreganj district unit of the group is organising a special book reading season titled “Himu-der Boi Uthsab” from 2:00 pm to 5:00 pm at the Gurudayal College Field Muktamancha, while the Narsingdi unit of the platform will commemorate the legend with a special publication titled ‘Kachari’.

Besides, different units of the platform will plant trees in more than 45 districts and organise awareness programmes against cancer in more than 20 districts.

Several other organisations are also commemorating the day with various events, while fans and admirers are sharing emotional tributes to the legend on their social media accounts.

Television channels and radio stations are also airing various programmes, highlighting the life and glorious career of the wordsmith. Channel-i is commemorating the acclaimed filmmaker with a special three-day programme schedule, showcasing three films of the prolific filmmaker including “Amar Achhe Jol” on Sunday, “Shrabon Megher Din” on Monday and “Ghetuputra Komola” on today.

In his academic life, he passed the School Certificate (1965) from Bogra Zilla School, Intermediate from Dhaka College and earned his BSc and MSc in Chemistry from Dhaka University with first class. He joined Dhaka University as a lecturer of Chemistry and later went to North Dakota State University in the United States to pursue his PhD in Polymer Chemistry.

‘Nondito Noroke’ (1972) was Humayun Ahmed’s debut novel, which gave Humayun the breakthrough and propelled his career as a writer. The Ekushey Padak winner writer wrote over 200 fiction and non-fiction books, all of which were bestsellers in Bangladesh to date.

Humayun Ahmed also explored success as a filmmaker in the early 1990s and went on to make a total of eight films in his filmmaking career, each based on his own novels. Two of his films, ‘Syamol Chhaya’ (2004) and ‘Ghetuputra Komola’ (2012) were the official Bangladeshi submission for the Academy Award for Best Foreign Language Film in their respective years.

The literateur is survived by two sons Ninit and Nishad with his second wife and actor-director Meher Afroze Shaon; and the only son Nuhash Humayun who is currently working in the media industry as a content creator and director, and three daughters Nova, Shila, Bipasha with his first wife Gultekin Ahmed.