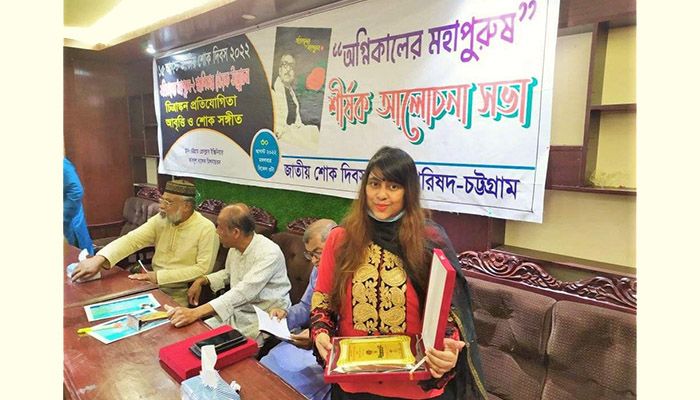 ﻿Recently, the popular young writer Shammi Tultul received the Bangabandhu Shokanjali Award for her contribution to writing. On the occasion of National Mourning Day, Bangabandhu Academy organized the unveiling of the 'Agnikaler Mahapurush' memorial, painting competition, recital, and mourning music and discussion meeting at Engineer Khalek Auditorium of Chattogram Press Club. After the discussion, honors were given to the meritorious.

Former CCC Mayor AJM Nasir Uddin was present as the chief guest under the chairmanship of journalist Didar Ashrafi. Bangladesh Ambassador to Kuwait SM Abul Kalam spoke as the main speaker. Brave freedom fighter Safar Ali, Councilor Rekha Alam Chowdhury, and other guests also gave speeches on the occasion. The chief guest of the function unveiled the cover of the “Agnikaler Mahapurush” commemorative which contained a poem titled “Fuler Sourave Bangabandhu” written by Shammi Tultul. Regarding receiving the award, Tultul said, I have written a lot about Bangabandhu, and am still doing so. I am overwhelmed to receive this award.

She also said that every generation should know Bangabandhu. What comes out of writing about him will be known to the next generation. Shammi Tultul has published more than a dozen books and has won significant awards and honors in recognition of her writing.