Volkswagen to Change CEO And Style with Departure of Diess 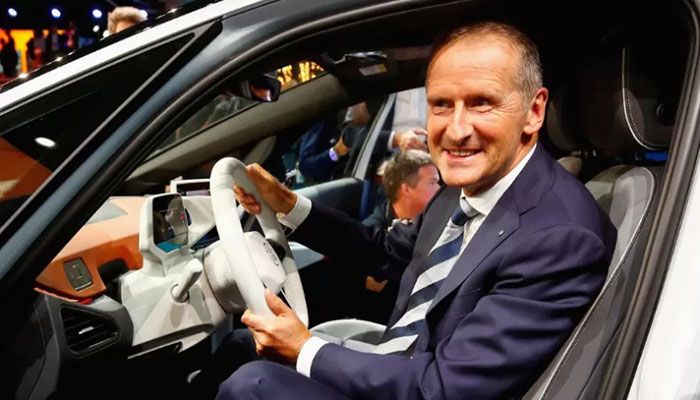 Volkswagen unexpectedly announced Friday that its CEO Herbert Diess will step down in a few weeks after four years at the head of the German auto giant as it attempts an ambitious shift towards electric vehicles, reports AFP.

Diess's will leave the helm from the top of the world's second-largest automaker "by mutual consent" on September 1, Volkswagen said in a statement.

The outgoing CEO had been in the hot seat at Volkswagen for months amid clashes with workers' representatives and nagging troubles at the group's software division.

The change at the top comes as Volkswagen is aiming to leave behind combustion engines to become the world's biggest electric car manufacturer by 2025 -- a target boosted by Diess himself.

Diess had "played a key role" in the transformation of the group, steered the company through "extremely turbulent waters" and "implemented a fundamentally new strategy", said Volkswagen supervisory board chairman, Hans Dieter Poetsch.

The reins will be taken by Oliver Blume, the current boss of the Porsche sports cars, part of the Volkswagen family of 12 brands, which also includes the likes of Skoda and Audi.

The switch was decided at a meeting of the group supervisory board on Friday.

"Team spirit, fairness and passion are essential for success," he said in a statement on Friday.

Blume will stay on as the CEO of Porsche, which is in the midst of planning an entry onto the stock market, potentially as soon as this year.

Diess took over Volkswagen in 2018, tasked with turning the page once and for good on the 2015 "dieselgate" scandal, where Volkswagen tampered with millions of diesel vehicles to dupe emissions tests.

Under Diess, Volkswagen has backed its electric shift with a total of 46 billion euros ($46.8 billion) in planned investments over the next five years.

Latterly, Diess took over responsibility for VW's tech division Cariad on the board of management.

But the development of a platform to be used in the group's vehicles has however been mired by "production delays" that have "cost money", according to German automotive expert Ferdinand Dudenhoeffer.

The software branch had likely "created too many problems and challenges for the VW Group", he said.

Revitalising the software division would be top of Blume's in-tray, Dudenhoeffer said, along with the future of Volkswagen's battery strategy.

In one of his last acts as CEO, Diess laid the ceremonial cornerstone at the site of the group's first in-house battery factory alongside German Chancellor Olaf Scholz.

The outgoing CEO often ruffled feathers with his divisive style which led to clashes.

An open admirer of Elon Musk, the CEO of American electric vehicles pioneer Tesla, Diess said last year the storied German carmaker would need a "revolution" to take on its US rival.

His suggestion last October that up to 30,000 jobs could be at risk at Volkswagen in Germany if it could not cut costs in its transition to battery-powered models angered powerful workers' representatives.

In 2019, Diess was made to apologise for making a play on words with a Nazi slogan -- "EBIT macht frei" -- a ham-fisted attempt to underline the importance of operating profits to the group.

The Volkswagen group as a whole has been in the spotlight of late for its operations in the Chinese province of Xinjiang, where authorities are accused of leading a crackdown against the Muslim minority.

Diess said recently the automaker "should stay" in the region and gave assurances there is "no forced labour" at the factory it operates together with its Chinese partner SAIC.