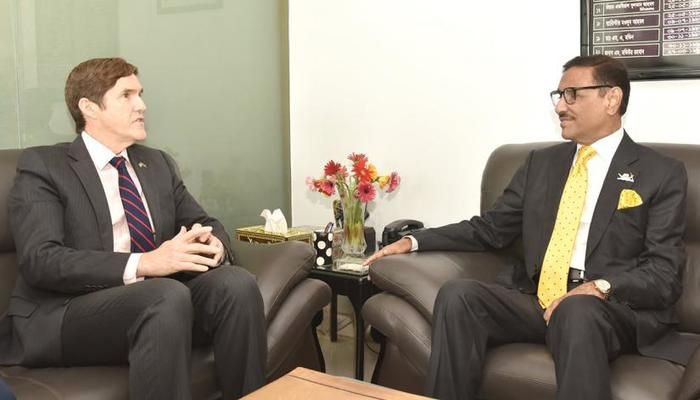 ﻿﻿﻿Washington has sought an explanation from Dhaka over its strict stance against NGOs operating in Rohingya camps, said senior Cabinet member Obaidul Quader.

His remark came while briefing the media after a meeting with US Ambassador Earl Robert at his Secretariat offices on Sunday (Sept 8).

“We told the US that the government has received some complaints regarding the activities of the NGOs,” he said.The envoy was told that the NGOs were cleared for organizing a prayer gathering for Rohingya, but a political rally was held instead, said Quader.

“The government has come to know some of NGOs’ aiding the rally and is scrutinizing the allegations against them,” he said.

Quader, who serves as the ruling party’s general secretary, said that Ambassador Miller has been informed of the activities of the NGOs and the complaints against them. “The US agrees with the initiatives Bangladesh has undertaken to repatriate the Rohingyas.”

Saying that the envoy has also been informed of the problems Bangladesh is facing due to the 1.1 million Rohingyas it has sheltered, he added, “We are facing all sorts of problems including geological, political and social as well as in tourism.”

The US will mount pressure on Myanmar to take back the Rohingyas, said the road transport minister.Responding to queries on a meeting between BNP and Dhaka-based foreign diplomats, including Miller, he said, “It’s the US embassy’s routine task.”

He, later on, added that Miller has been told that the opposition is being given plenty of space and there are no political or administrative problems.

On the BNP’s claim that the government isn’t granting bail to its incarcerated chief Khaleda Zia on purpose, he replied that it was a “legal issue”.