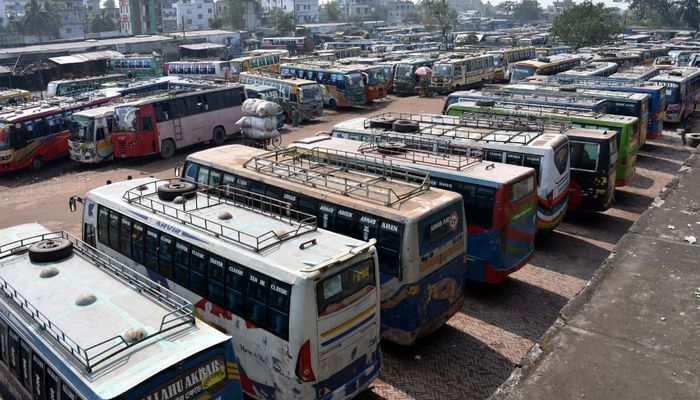 Bus workers went on an indefinite strike in a number of southern districts including Jhenaidah, Khulna, and Satkhira from Monday morning protesting against enactment of the Road Transport Act.

The much-talked-about Act came into action from November 1. The Road Transport and Bridges Ministry issued a notification in this regard on October 22. Mohamamd Nurul Islam, president of Khulna Motor Workers Union, said they went on strike to protest against the new Act.

Many people were forced to use other means of transportation to reach their destinations. Razia Akter, a resident of Faridpur, said she was planning to go to her village home but had to cancel the idea because of the strike.

Mamun Sheikh, a private service holder, said: “I was scheduled to travel to Dhaka but the bus company returned my money and said no bus will leave for the capital today.”

In Satkhira, bus services were unavailable on all routes. The leaders of Motor Workers Union demanded an amendment to the Act.

From Jhenaidah, no bus left for Kushtia, Magura, Jashore, and Chuadanga since morning.

The 'Road Transport Bill-2018' was passed in parliament on Sept 19 last year with provision for maximum five years' jail for any death or serious injury caused by reckless driving.