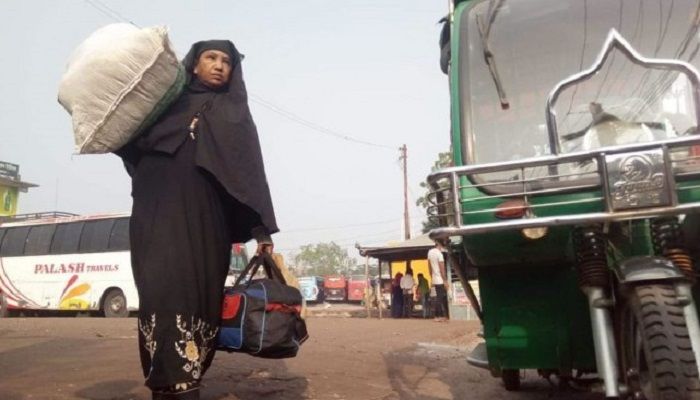 Commuters suffer as all kinds of buses and motorised vehicles remain parked on the roads. This photo was taken in Khulna. Photo:Collected

﻿The transport strike enforced for protesting the newly implemented Road Transport Act-2018, has been continuing in eight districts for the second consecutive day, causing immense sufferings to the commuters.

In Khulna, workers declared that they will continue their strike until some sections under the law are npot amended, said President of the Khulna Motor Workers’ Union Md Nurul Islam Baby.

Owing to the strike, hundreds of buses were seen parked at Royal Intersection and Shonadanga Bus terminal this morning.

In Kushtia, movement from the district to other destinations was restricted owing to the strike and many had to resort to hiring local modes of transport such as auto-rickshaws and electric bikes to reach their destination.

No decision has been taken to call off the strike but the local administration and transport leaders are likely to sit in a meeting soon, said Mahbubul Haque, president of Workers’ Union in Kushtia.

But transport movement began in Rajshahi partly this morning although the presence of bus on the road was thin.

Jahangir Alam, president of Rajshahi Motor Sramik Union, said there are 500 public buses in the district, of which 250 run on every alternate day.

After the law was enforced, the drivers feel unsafe as many of them have no valid documents.