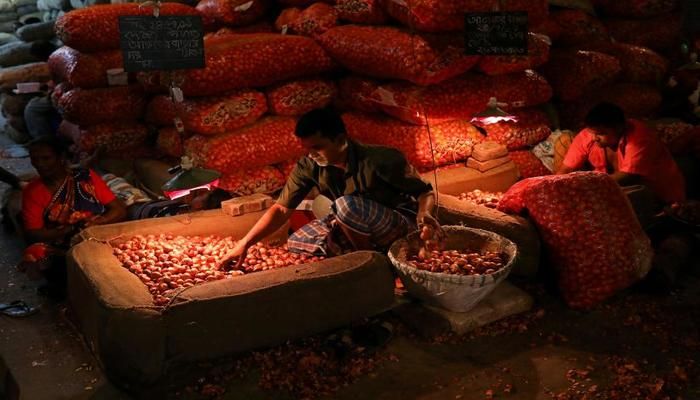 India may keep a ban on onion exports until February because domestic prices have soared after the harvest of summer-sown crops, which were expected to augment supplies, was lingered and harmed by untimely rains, a government official said.

The ban on overseas sales by India, the world's biggest exporter of the bulb, will keep prices uplifted in Asia and require importers in Nepal, Bangladesh, and Sri Lanka to find other sources to fulfill their demand.

Despite the export ban made in September to keep domestic supply inside India, prices have surged after rain and floods during October and November limited onion supply, especially in Maharashtra, the country's biggest producer.

Wholesale onion prices are about 40 rupees (55 cents) per kg, down slightly from 55 rupees earlier this month, the highest in six years, according to data assembled by the state-run National Horticultural Research and Development Foundation.

"We will think about resuming exports once prices reduce. Right now it is not possible," a senior government official at the Indian Department of Consumer Affairs said on Monday.

"From January onwards supplies are expected to rise meaningfully. Once prices come down to a safe level, say below 20 rupees (per kg), then we can allow exports," he said, asking to remain unidentified because he is not authorized to speak to the media.

A spokeswoman for India's Ministry of Commerce, which enacted the ban at the request of the Consumer Affairs department, did not immediately respond to an email requesting comment on how long the export ban would last.

Onion growers and government officials guessed the ban would be lifted by the middle of November anticipating higher supplies from the summer crop.

Sakharam Darekar, a 79-year-old farmer from the village of Ghodegaon, 180 km (108 miles) east of Mumbai, said that last month's heavy rainfall left fields waterlogged for a few days and damaged the onion crop on his 2-acre (0.8 hectares) plot that was ready for harvesting.

The rains have also delayed planting of the winter-sown crop by damaging seedlings in nurseries.

"I want to plant onion but seedlings are not available," said Dinesh Khairnar, a farmer in the Nashik district of Maharashtra.

Since India's ban, onion prices have spiraled in Asia and forcing leading buyers such as Bangladesh and Sri Lanka to source the crop from Myanmar, Egypt, Turkey, and China. But the huge volumes lost will be tough to replace as India exports more than 2 million tonnes of onions per year.