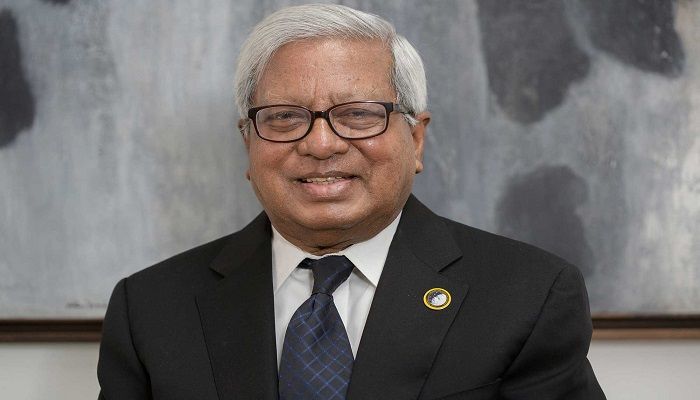 ﻿Founder and Chair Emeritus of Brac, Sir Fazle Hasan Abed has been honored with the Outstanding Member of the South Asian Diaspora Award (OMSAD).

The award was given at the Fourth South Asian Diaspora Convention held in Singapore’s National University from November 15 to November 17.

Dr Manzoor Hasan, executive director of the Brac Center for Peace and Justice, on Friday received the award on behalf of Sir Fazle Abed as he was unable to attend the ceremony because of his health condition. Senior Minister of Singapore Tharman Shanmugaratnam handed over the award.

Earlier, all the distinguished guests were welcomed by Ambassador Gopinath Pillai, the Chairman of the Institute of South Asian Studies (ISAS), a very prestigious and globally renowned think-tank located in Singapore.

Principal Research Fellow of ISAS, Dr Iftekhar Ahmed Chowdhury, read out the citation on behalf of the organisers.

The citation for the award recognized Sir Fazle Abed as ''a social worker with a humane heart''. It recognized contemporary Bangladesh as ''a country on the rise with its phenomenal progress being viewed as a remarkable achievement in all quarters''.

Enayetullah Khan, chairman of Cosmos Foundation, addressed a very large gathering of a cross-section of the Singaporean community at a plenary session of the Convention titled ''Business in South Asia: Opportunities and Challenges''.

Khan laid out the manner in which the economy of Bangladesh had grown steadily and in a sustained fashion to become one of the fastest ones in the region and even in the world through the mix of intense private initiatives and appropriate public policies.

He recognized that the issues of governance and climate change are often identified as “challenges”, and stated measures are constantly being taken to address and surmount such problems.

In another session on “Women Empowerment in South Asia”, which followed a keynote address by Minister Indranee Rajah from the Singapore Prime Minister’s Office, Rasheda K Choudhury, executive director of the Campaign for Popular Education in Bangladesh, spoke of constraints such as the Rohingya refugee influx from Myanmar into Bangladesh, and a regional rise of “obscurantism”, saying those notwithstanding, women’s participation in all spheres of life in Bangladesh had not only become visible but also has gained wide recognition.

Haque, who was earlier a ranking official of the International Organization of Migration (IOM), traced the evolution of the global migratory process and analysed how the Bangladeshi experience fitted into the process.

A prominent feature of this year’s event was a recognition of the across the board role of Bangladesh and the Bangladeshis.