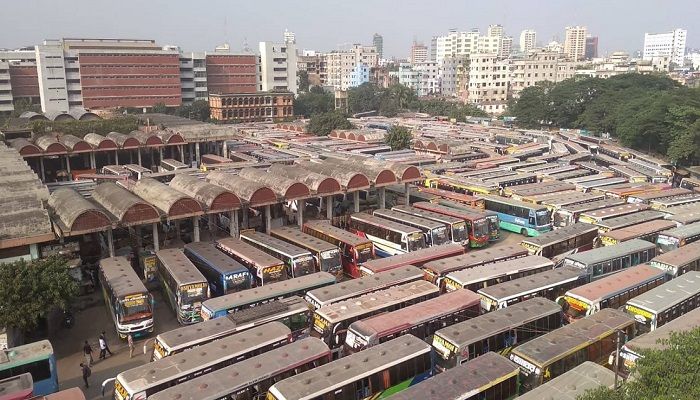 Buses did not leave Dhaka's Mohakhali bus terminal on Thursday, November 21, 2019 fearing harassment by those who have been observing transport strike at different parts of the country demanding amendment to the new transport law. Photo: Collected

﻿Inter-district bus services came to a halt as no buses left Dhaka's Mohakhali bus terminal fearing harassment by the protesters observing transport strike at different parts of the country demanding amendment to the new transport law.

The transport service at the terminal might resume later in the day, Md Mizan, a staff of Ena Paribahan, said.

Also, bus tickets were sold at much higher prices at the ticket counters of the terminal, a passenger alleged.

A huge number of commuters were seen waiting for busses at the terminal.

Meanwhile, few busses left the Gabtoli terminal today but the scenario there was quite similar to Mohakhali, a staff of AK travels said.

Commuters in different parts of the country have been facing immense sufferings for the fourth consecutive day following the work abstention being observed by a section of transport owners and workers demanding amendments to the new Road Transport Act-2018.

After the law was enforced on November 18, the drivers felt unsafe as many of them don't have valid documents.

The new law, with increased fines for traffic offences, was supposed to be put into effect on November 1 but was delayed as transport associations had allegedly been lobbying against it.

Although central leaders of transport owners and workers associations said they did not instruct their units to go for the strike, many workers have been observing work abstention since November 18.