RBRTC to Bring Back Lost Glorious Tradition of Bamboo 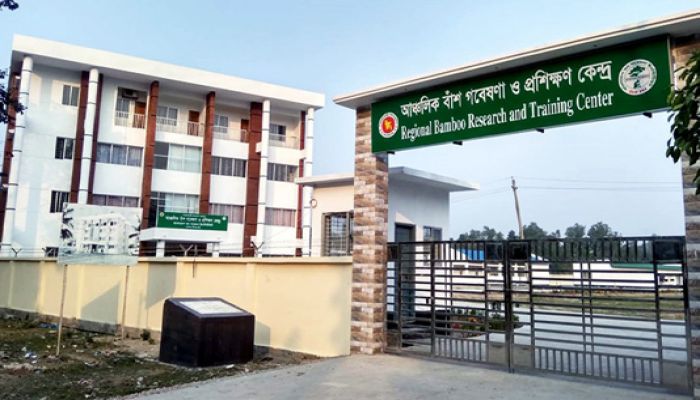 ﻿The Bangladesh Forest Research Institute (BFRI) is set to launch its Regional Bamboo Research and Training Center (RBRTC) in Domar Upazila, Nilphamari District, next Saturday to bring back the glorious tradition of bamboo.

The BFRI invested Taka 18 crore for the building of the RBRTC, the first of its kind in the world, including Taka 3.50 crore, and the remaining sum for the establishment of the modern research laboratory and training facilities, to revive the missing bamboo tradition.

"Minister for atmosphere, forestry, and climate change Md. On Saturday next Shahab Uddin is scheduled to inaugurate the newly built RBRTC," BFRI senior research officer posted at RBRTC Md. Anisur Rahman had told BSS about this.

Under the personal guidance of Prime Minister Sheik Hasina, the RBRTC was founded with the goal of conducting scientific research on bamboo and providing training for farmers to increase the production of bamboo using the latest technologies.

The BFRI started construction of the RBRTC in 2016 and completed the project well ahead of the scheduled time of December 2020 last October.

Bamboo is generally cultivated from the old mouth of  bamboo tree in Rangpur division.

Bamboo-made furniture is beautiful, elegant and environmentally friendly with a lifespan of about 25 years and half the cost of production relative to wooden furnishings.

"Training farmers and bamboo artisans in the production of bamboo implementing modern technology would raise the life expectancy of bamboo and bamboo-made goods by four to five times," Rahman said.

Once, bamboo-made products were being used abundantly in the household, agriculture and business sectors. The lower and middle-class houses were also made of bamboo.

Nevertheless, bamboo cultivation and development has been limited due to the lack of sufficient distribution of newly invented technologies.

“The RBRTC has taken up the task of reviving lost traditions of bamboo, mainly aiming at benefiting farmers financially by increasing production of bamboo at reduced costs,” Rahman said.

Talking to BSS, bamboo artisan Ashraf Ali, 66, of Boragari union in Domar Upazila said, once the bamboo industry was found in almost every village. But, plastic products have captured the place of eco-friendly bamboo-made products.

“The bamboo industry is on the verge of extinction now due to lack of capital, increase in wages of workers and easier availability of plastic products at the lowest costs,” Ali said.

However, there is still a huge demand for bamboo products in rural areas.

“In addition to men, many women were involved in producing bamboo-made and cane-made household goods to sell those in the local markets in the past,” he said.

With time, artisans and staff from bamboo or cane don't maintain their ancestral occupation and cottage industry dependent on bamboo.

"As a result, many bamboo craftsmen and workers have left their ancestral profession," he said, hoping that the RBRTC can bring back the past glory of eco-friendly household goods and furniture made from bamboo.