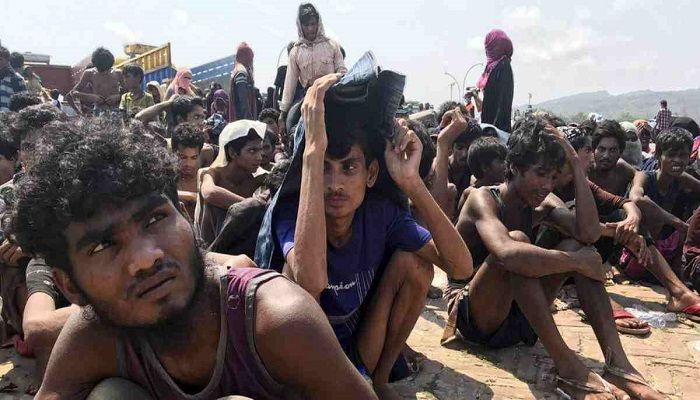 ﻿Bangladesh has sent a small group of Rohingyas, who entered Bangladesh a couple of days ago from Myanmar in small boats, to Bhasan Char Island.

Foreign Minister Dr AK Abdul Momen confirmed UNB about it saying good facilities are there for them.

The decision has been taken aiming to keep Rohingya camps free from coronavirus, he said adding that no Rohingya so far tested positive in the Rohingya camps.

They then informed the Bangladesh Coast Guard officials who detained the Rohingyas.

Later, the Rohingyas, not less than 70, were sent to Bhasan Char in a coastal ship, Dr Momen said adding, ''There's a very good facility in place.''

UNHCR, earlier, said they received reports of boats with Rohingyas aboard being denied entry to countries in the region.

The Rohingyas are reportedly from those two boats which were floating in the deep sea for weeks.

Foreign Minister Dr Momen, earlier, explained that the around 500 Rohingyas who were in two boats not in or even near the Bangladesh maritime border.

According to the law of the seas, he pointed out, other countries in the region have responsibilities to save the Rohingyas.

''Bangladesh has shouldered very heavy responsibilities for the Rohingya refugees and must not be left alone to deal with these challenges," Steven Corliss, UNHCR Representative in Bangladesh said mentioning that turning desperate people away cannot be an answer.

The UNHCR said they are deeply concerned about the fate of the people in these boats, as weather conditions can change rapidly in the Bay of Bengal during this season.

According to reports, the UN refugee agency said, the people aboard have little food or water.

The UNHCR Spokesperson said they have contacted the government requesting it that the people be allowed to safely disembark and providing assurances that UNHCR would ensure their safe quarantine as a precaution against any possible risk of COVID-19 infection.

Bangladesh said it does not want to see the loss of single life at sea and it is time for other countries to come forward and share the responsibilities.

Despite limited resources, Bangladesh has already given shelter to around 1.1 million Rohingyas on humanitarian ground.

Bangladesh responded to those requests noting that Bangladesh has not taken the sole monopoly approach of sheltering Rohingyas.

Bangladesh made it clear that the humanitarian disaster created by Myanmar must not be the sole responsibility of Bangladesh in the world to shoulder it.

Earlier on May 1, UNHCR, the UN refugee agency, said nearly 400 Rohingyas who arrived by boat recently are mostly registered with the Rohingya camps in Cox's Bazar district.

At the end of the 14 days quarantine period, they will return to their families and their shelters within the camps said the official at the UNHCR mentioning that the vast majority are already registered in Cox’s Bazar camps.

On April 16, members of the Bangladesh Coast Guard rescued 396 Rohingya people from a boat that was denied entry by Malaysia.

Bangladesh has given shelter to around 1.1 million Rohingyas on humanitarian ground.