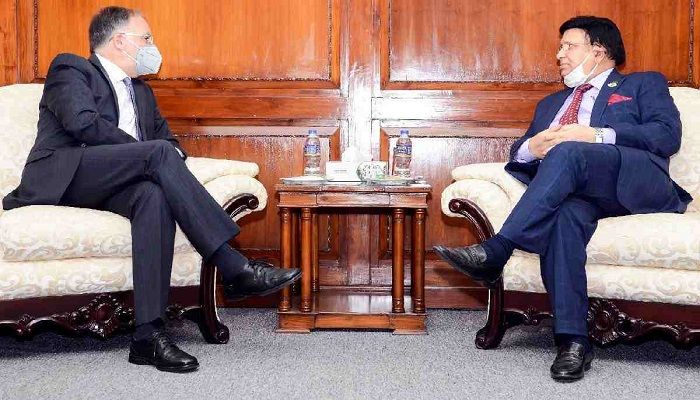 ﻿Foreign Minister Dr AK Abdul Momen has called for more investments from Spain as well as sharing expertise, especially in the energy and tourism sector with Bangladesh.

The Foreign Minister mentioned that Bangladesh has exported 6.5 million PPE to the USA as well as supplied medicines, such as Remdesivir, Hydroxychloroquine to some countries during the COVID-19 pandemic.

"Spain may rely on Bangladesh if PPE and other pharmaceutical products related to prevention/treatment of COVID-19 need to be imported," Dr Momen said.

During the meeting, Foreign Minister Momen commended the Spanish government’s efforts to curb the spread of COVID-19 pandemic, and also apprised the Ambassador of the government of Bangladesh’s timely and effective policies in this regard.

The Spanish Ambassador informed that many people died of COVID-19 in Spain, and its tourism sector has been hit hard by COVID19, leaving many people jobless.

However, Spain will need seasonal workers for agriculture in the summer.

The Foreign Minister requested the Ambassador to consider employing seasonal workers from Bangladesh as they have already expertise in the agriculture sector.

Reiterating Bangladesh’s commitment to combat the devastating effects of climate change, Foreign Minister recalled the successful visit of Prime Minister of Bangladesh to attend the COP25 in Madrid in December 2019.

The Foreign Minister and Spanish Ambassador, both expressed that arrangement of VVIP level visit between Bangladesh and Spain may elevate existing bilateral relations to a newer height.

He further appealed for imposing economic sanctions on Myanmar by the international community so that Myanmar abide by its commitment for safe, dignified and sustainable repatriation of the Rohingya people.

Spanish Ambassador expressed his gratitude for the all-out support extended during his tenure in Dhaka and Foreign Minster wished him success in his future assignments.