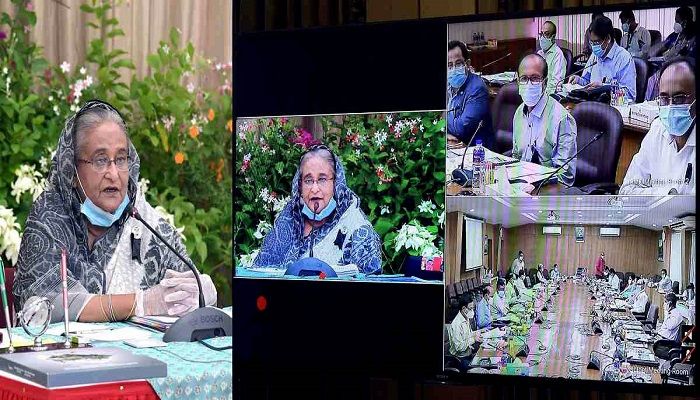 ''It (BEZA) will have to work in a way so that foreign investment comes on one hand and local people can invest on the other, or we can promote small investors. That means we need to attract and promote our young generation,'' she said while addressing the 7th meeting of the BEZA Governing Board.

The Prime Minister said the young generation should not only run after jobs as they can do something (take ventures). ''We'll have to work keeping eyes on these,'' she added.

She joined the virtual meeting from her official residence Ganobhaban through a videoconference, while other participants were connected from the Prime Minister’s Office and the Cabinet Division office.

Sheikh Hasina said the government is setting up special economic zones across the country to attract investment, create jobs and protect arable and forest lands.

The Prime Minister said the government has been on all-out efforts to gear up industrialisation with a view to creating jobs, enhancing production, raising the purchasing power of people, fulfilling local demands and boosting exports.

''While going for industrialisation, we've to keep it in mind that arable lands must be protected to ensure food security for the growing population in a small country like Bangladesh. It's [Bangladesh] a delta nation. So, it's also indispensable to maintain the balance of nature. With eyes on these, we'll have to create jobs simultaneously,'' she said.

Sheikh Hasina said the government wants to set up special economic zones not only in Dhaka or port areas but also across the entire country as it has a goal to create jobs for a huge population and use agricultural goods as raw materials for the agricultural industry or food-processed one.

The government, she said, has been providing various incentives to attract local and foreign investment.

Mentioning that Bangladesh has already gained much progress in drawing investments and building small entrepreneurs, Sheikh Hasina hoped that her government would be able to continue this progress.

The Prime Minister said Father of the Nation Bangabandhu Sheikh Mujibur Rahman nationalised Pak government-owned mills and factories as those had remained abandoned and sick ones.

Due to the measures taken by the Father of the Nation, Bangladesh made a quick turnaround recovering from a war-ravaged country, said Hasina, the eldest daughter of Bangabandhu.

''Coming to govern the state, I wondered seeing he had created the bases for everything in every sector,'' she said adding the Bangabandhu left no sector untouched.

''Unfortunately, the politics of killings and coups started in the country exactly in Pakistani style after the killing of the Father of the Nation on August 15, 1975,'' she said.

The Prime Minister said Bangladesh could not get desired development after the killing of Bangabandhu. ''The Bengalis had remained neglected and dependent on others for a long time,'' she added.