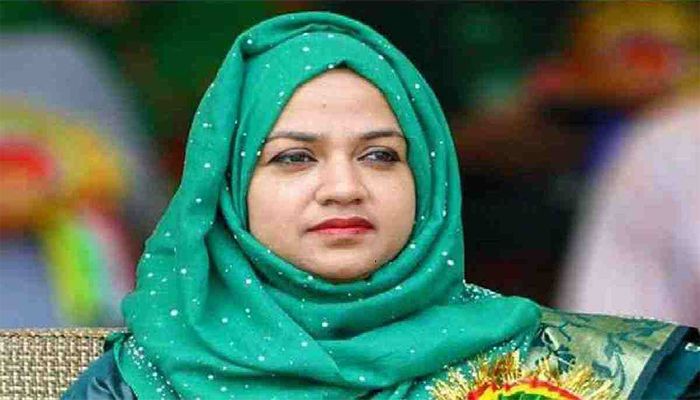 ﻿﻿﻿Health Minister Zahid Maleque said on Sunday that there is no need for Ghoraghat UNO Wahida Khanam to be sent abroad for better treatment at this time, but a decision in this regard will be taken later, if necessary.

"Observing Wahida 's condition, it seems she doesn't need to be sent abroad right now. Doctors at the National Institute of Neurosciences & Hospital is taking good care of her. A decision on this will be made later, if necessary, "said the Minister.

In the morning, the Minister of Health came up with the information while talking to reporters about the UN 's health at the hospital, reports UNB.

"The 72-hour medical review at the hospital will end on Monday morning and no signs of any infection have yet been identified. The patient is under good care and all is going well. All that is needed for her care will be given, "he said.

The minister went on saying, “UNO Wahida talked to me and I think her condition is better now. Eight doctors successfully operated on her injured parts for two and a half hours and the right side of her injured body is still paralysed. Doctors said it will be cured with physical therapy.”

Key accused to be in court

In the meantime, Asadul Islam, the main suspect in the assault on UNO Wahida Khanam and her father Omar Ali, will be brought before the court on Sunday, said Imam Zafar, Dinajpur DB Police Officer in Charge and Investigator of the case.

Police handed Asadul over to the DB police early Sunday, and it will be produced before the court about 3-4 p.m., he said.

Members of Rab-13 handed him over to the regular police on Saturday evening, he added.

Wahida Khanam, Upazila Nirbahi Officer (UNO) of Ghoraghat, was seriously injured early Thursday in a miscreant attack at her home in Upazila Parishad.

Her father, Omar Ali, was also wounded in a terrible attack. They were brought to the Medical College and Rangpur Hospital.

Later, the UN airlifted a Bangladesh Air Force MI-171SH helicopter from Rangpur to Dhaka. She is currently seeking treatment at the National Institute of Neurosciences & Hospital, Dhaka.

Earlier on Saturday, a court in Dinajpur placed two accused on a 7-day warrant each in a case filed in connection with the attack on Wahida Khanam, the UNO of Ghoraghat, Dinajpur and his father.

Those remanded are Nabirul Islam and Santu Kumar.

Judge Shishir Kumar Basu of the Dinajpur Chief Judicial Magistrate of Amoli Adalat No-7 passed the order on Saturday after they had been placed before the court by the investigating officer seeking a 10-day stay.

The case was handed over to the Police Detective Branch (DB) in the afternoon from the Ghoraghat Police Station.

Ghoraghat police inspector Mominul Islam was investigating the case from the outset. Now, Dinajpur DB Police Officer-in - Charge Imam Zafar has been made to investigate the case.

In addition, two more people were arrested by the police in connection with the attack on UNO and her father from Ghoraghat upazila in the Dinajpur district on Sunday. They were called Shahjahan, 45, son of Khoka Sheik and Sohel Rana, 33, son of Abdur Rahim of Upazila, said Amirul Islam, a Ghoraghat Police Station officer.

With this, law enforcers have so far arrested eight people, including prime suspect Asadul in the case.