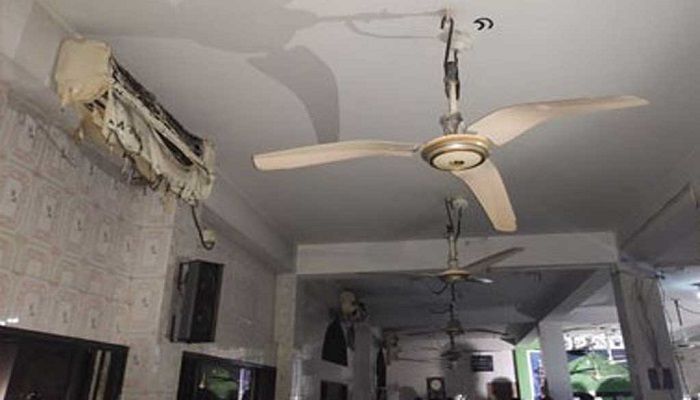 ﻿Although two days have elapsed since the horrific blasts at a mosque in Narayanganj, it is yet to be unearthed what actually caused the explosions that killed 24 people and injured many more.

Fire Service officials said gas accumulated inside the mosque from a leaking pipeline might be the reason behind the explosions.

However, investigations are underway as different probe bodies have been formed to unearth the reason.

On Saturday Titas Gas Transmission and Distribution Company Ltd formed a 5-member committee to investigate whether gas leakage in pipelines sparked the fire and the subsequent blasts of ACs at the mosque.

The government has so far formed four committees to probe the deadly blast.

Some 40 people suffered burn injuries as all the air-conditioners of the mosque exploded during Esha prayers in Fatullah, Narayanganj on Friday night.

One of the injured died at night. Later, 23 other people succumbed to their injuries at Sheikh Hasina National Burn and Plastic Surgery Institute till Sunday afternoon.

Locals said the incident took place around 8:45 pm at Baitus Salam Mosque when the devotees had just finished their prayers.

An air-conditioner went off and sparked a fire inside the mosque. Later, the remaining six ACs exploded there, leaving the 40 devotees injured.

Deputy Assistant Director of Narayanganj Fire Service Abdullah Arefin said there was an underground gas line on the north side of the mosque.

Gas can accumulate inside the mosque due to gas leak from the line. Gas might have accumulated at the mosque for having ACs. An explosion can occur from a spark when someone turns the power switch on, he said.

Brigadier General Sajjad Hossain, Director-General of the fire service, said, ''We're sure there's an underground gas line or there's one very close to the mosque. We're also investigating the issue of electrical short-circuit. We'll also look into whether it is sabotage. We'll continue the investigation keeping all the issues open.''

A team from Titas Gas' regional office visited the mosque on Saturday morning and disconnected the gas connection.

AC blasts or something else!

The electrical box for the AC line on the east-south corner wall of the mosque was also unharmed.

Shah Nizam, who came to offer prayers at the mosque, said had the ACs exploded, the walls would have collapsed but it did not happen so.

''There might be another reason behind the fire,'' he said.

A week ago, he said, gas was coming out from the gap between two tiles on the floor.

Local people suspected that that gas was leaking from an underground gas line outside the north wall of the mosque.

He said the government has made all the arrangements for the treatment of those injured in the blasts.

Besides, Nasrul said, each of the families of the victims has been given Tk 20,000 for burial purposes.

The cause behind the blast is being investigated separately by various government agencies, he added.

The government has formed four separate probe committees to investigate the incident.