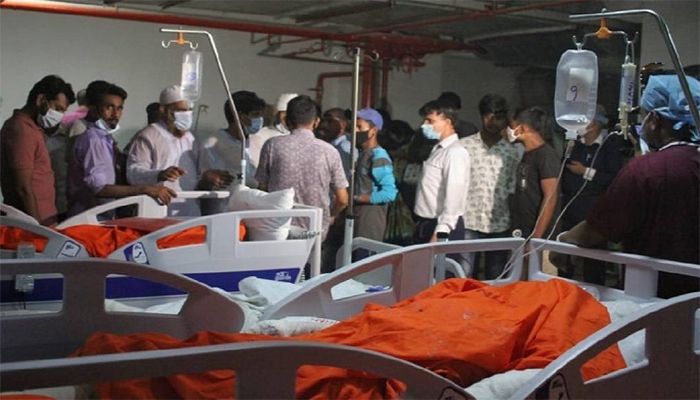 The number of deaths from the Narayanganj mosque blast has risen to 26, as five more victims died on Sunday at the Sheikh Hasina National Burn and Plastic Surgery Institute.

The latest victims are 30-year-old Monir Farazi, and 51-year-old Abul Bashar Molla died Sunday night. The others were Julhas Uddin, 35, Mohammad Ali Master, 55, and Shamim Hasan, 45, who died earlier in the day.

Another 11 people at the hospital are fighting for their lives, said Dr Samanta Lal Sen, the Institute's coordinator.

Fatullah Model Police officer-in-charge Aslam Hossain said the authorities handed over the bodies of 20 victims to their families.

Some 40 people suffered burn injuries as all the mosque air-conditioners exploded in Fatullah, Narayanganj on Friday night during Esha prayers. One of the injured died at night.

Locals said the incident took place at Baitus Salam Mosque about 8:45 pm, when the devotees had just finished their prayers. An air conditioner went off inside the mosque and sparked a fire. The remaining six ACs later exploded there leaving the 40 devotees wounded.