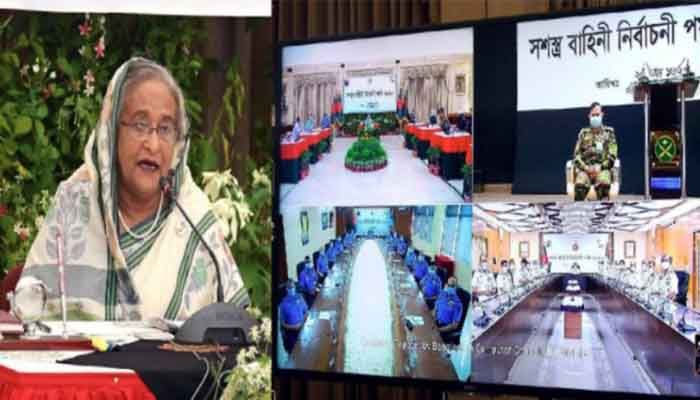 Prime Minister Sheikh Hasina called for discarding ''martial law-word'' from the ''military lexicon'' or terminology, saying that it (martial law) never brought any welfare for the country and the armed forces as well.

''We should exclude the 'martial law-word' from 'military lexicon' as it never brought any welfare, rather than a bloodbath, for the country and the armed forces as well,'' she told the Armed Forces Selection Board Meeting 2020.

Referring to 19 coups that took place during the military rule of Ziaur Rahman, Sheikh Hasina said a huge number of officers and soldiers were killed in the armed forces during these coups.

''Such a huge number of armed forces officers and soldiers don't die even in a war that happened during the rule of military dictator Ziaur Rahman. We don't want to hear any more crying of the fathers for losing their sons and of the sons for losing their fathers (in the armed forces),'' she added.

The prime minister addressed the virtual meeting from her official Ganabhaban residence this morning.

Sheikh Hasina said the armed forces were mostly affected due to the coups that took place after the August 15, 1975 carnage.

The premier said many armed forces members who took part in the Liberation War were brutally killed in these coups.

''The most bloodbath took place especially in army and the air force and we had to hear the crying of the widows who lost their husbands and the parents who lost their sons in these coups,'' she mentioned.

Sheikh Hasina reiterated her government's goal to further modernise the armed forces and make it time-befitting.

''Our armed forces, where our family members were honourable members, are the symbol of our independence and sovereignty our aim is to make it more modern and time-befitting and we’re working to attain this goal,'' she said.

In this connection, the prime minister spelt out various steps of her government to make the armed forces more well-equipped to safeguard the country's hard-earned independence and sovereignty.

Chief of Army Staff General Aziz Ahmed was connected to the function from army headquarters, Chief of Naval Staff Admiral