Momen for Signature Campaign to Bring Back Bangabandhu’s Killers 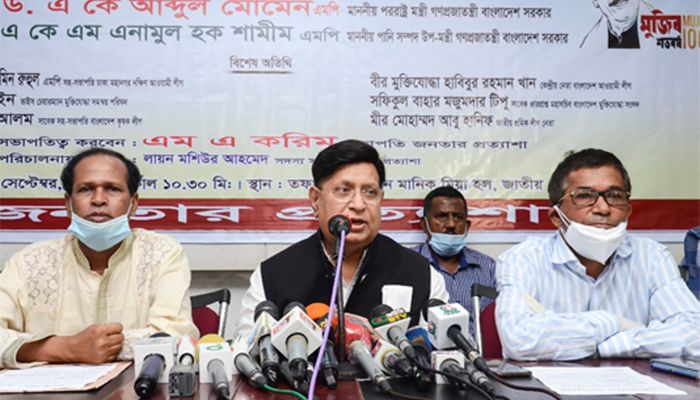 "If we can have lakhs or a core of signatures on the demand ... we can put pressure on those countries (where the killers are now residing) to get them back," he said.

The foreign minister was speaking at a discussion on Bangabandhu, organized by Janatar Prottasha with its chairman M A Karim in the chair at the Jatiya Press Club in the capital.

The government had traced out the two convicted furtive killers of Bangabandhu — Rashed Chowdhury and Noor Chowdhury — residing respectively in the U.S. and Canada, while the whereabouts of the other three fugitives — Khandaker Abdur Rashid, Shariful Haque Dalim, and Moslehuddin Khan — are yet to be identified.

After knowing about the locations of the two killers, the Foreign Ministry and the Law Ministry have been closely engaged with the U.S. and the Canadian authorities in getting back these two absconding killers.

The foreign minister expressed his hope that within the 'Mujib Year' at least Rashed Chowdhury will be brought back to the country from the USA, marking the centenary of the birth of Bangladesh's founding father.

“He (Rashed Chowdhury) had provided false information to the USA authority and now his immigration case is being reviewed there,” he said.

The foreign minister said Bangladesh had filed a case in Canadian court against Noor Chowdhury, and won it. "But, even he (Noor) shows some legal ground in Canada," he said.

Momen said the Bangladeshi signature campaign would help bring back Noor Chowdhury, including the expatriates residing in Canada.

He called upon the Bangladeshi expatriates in Canada to mount pressure on the Canadian authority by telling them “Canada can’t be a hub of murderers … a murderer can’t live free in Canada”.

Momen said Dhaka has been seeking cooperation from all countries around the world to detect the remaining three fugitive convicted killers and send them here to help establish the rule of law in Bangladesh.

Momen said all Bangladesh missions abroad had been given special instructions by the foreign ministry to search for the killers.

He said three ministries- foreign, law and home affairs – have been working in this regard. “The government is putting in all sort of efforts to bring them back, but now we also need help from our people at home and abroad in this regard” he added.

He urged the Bangladeshi expatriates to be vigilant along with Bangladesh missions abroad to identify other three fugitive killers of Bangabandhu enabling the government to bring them back as well.

“I call upon our expatriate brothers as well as countrymen to give us information about them (fugitive killers) so that we can wipe off our stigma,” he said.

Momen also urged Bangladeshis expatriates to hold demonstrations in front of the residences of the identified fugitive killers in their respective countries to let their neighborhood know that a murderer is living beside them.

“We want to implement the court verdicts of the Bangabandhu murder trial to ensure justice, rule of law and good governance in the country,” Momen said.

Meanwhile, in April last, sacked military captain Abdul Majed, one of the Bangabandhu’s fugitive killers, was arrested and hanged at Dhaka Central Jail in Keraniganj.

Majed was on the run for nearly two-and-a-half decades to evade justice and after his arrest, Momen said, adding that he (Majed) had been hiding in India’s West Bengal for the past 23 years and returned to Bangladesh in March this year.

“It was a satisfaction that we had already been able to execute at least one of the fugitive killers — Majed — in this Mujib Year,” Momen said.

Twelve ex-military officers were sentenced to death for the August 15, 1975 killing of Father of the Nation Bangabandhu Sheikh Mujibur Rahman along with most of his family members.

Farooq Rahman, Shahriar Rashid Khan, Mohiuddin Ahmed of artillery faced the trials in the judge court while Huda was extradited from Thailand and Mohiuddin was sent back from the United States after the then district judge Golam Rasul delivered the judgment.