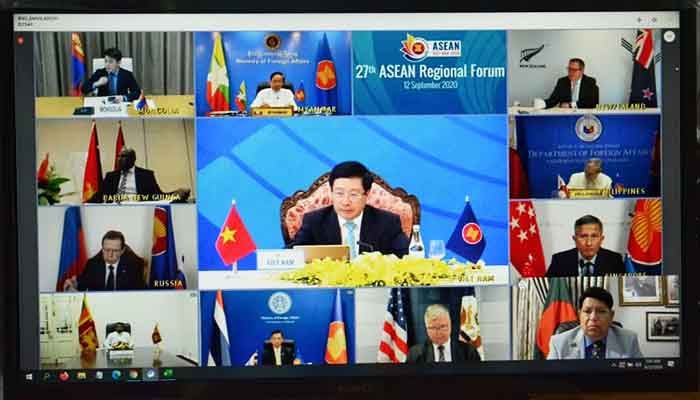 ﻿Foreign Minister Dr AK Abdul Momen on Saturday said there is a high possibility of uncertain situations in the region amid no solution to the Rohingya crisis which may frustrate hope for a peaceful, secure and stable region.

"Our fear is that, if this problem is not solved quickly, it may lead to pockets of radicalism," he said reminding all that terrorists have no borders and no faith.

The Foreign Minister made the remarks at the 27th ASEAN Regional Forum (ARF).

Despite the threat to Bangladesh's economy, ecology, and overall societal impact, Bangladesh gave shelter, on a humanitarian ground, to nearly 1.1 million persecuted people fleeing a massacre in Myanmar, their homeland.

"Myanmar is our friendly country and therefore, Bangladesh signed three instruments with Myanmar for repatriation," he said.

Myanmar agreed to take them back after verification but no one is taken back.

Myanmar also agreed to create a conducive environment for their voluntary repatriation and they agreed to ensure the safety and security of the displaced people.

"But unfortunately till today, none went back and instead of creating a conducive environment, fighting and shelling is ongoing in the Rakhine state," said the Foreign Minister.

Dr Momen said Rohingyas are not returning to their homeland primarily because they do not trust their government of safety and security.

In order to reduce trust deficit and confidence building, Bangladesh suggested Myanmar to engage non-military civilian observers from their friendly countries like ASEAN, China, Russia, India or other friends of their choice.

Such an initiative may reduce the trust deficit for a sustainable return, Dr Momen said.

"We solicit support from our ARF partners so that these hapless Rohingyas can return to their home in safety, security and dignity, resettle there, and reintegrate in their society," Dr Momen said.

Once they return to their homeland they could be contributing members in the development of Myanmar, he said.

The Foreign Minister said they were afraid the Covid-19 might badly affect 1.1 million Rohingyas, the displaced people of Myanmar, that live in a highly congested area.

"Fortunately, minimal got affected due to multiple targeted initiatives," he said adding that it is a difficult year for all.

But the entire humanity has come under the same umbrella in the fight against an invisible enemy called Covid-19 that defies frontiers, Dr Momen said.

The wave of Covid-19 has also affected Bangladesh like all other countries of the world, he said thanking Prime Minister Sheikh Hasina for taking timely actions.

"We have successfully managed to contain the spread of the Covid-19 infection and fatality rate. As of today, the death toll is only 4,668," he said.

Dr Momen said Covid-19 showed that the accumulation of stockpiles of weapons can not save human lives.

"Rather an investment in medical and social areas can protect us from this COVID. COVID pandemic created fear and it lockdown us for weeks," he said.

Once the vaccine is developed, it must be available to all without discrimination, said the Foreign Minister.

The challenges posed by COVID-19 made them dependent on digital technologies for the efficient functioning of the economy, Dr Momen said.

Driven by 'Digital Bangladesh-Vision 2021' of Prime Minister Sheikh Hasina, Bangladesh, today, is a reputed name in the global ICT landscape, he said.

"We have over 125 million mobile phone users, 43 million internet users, 14 million Facebook users and 99% geographical coverage in voice and data connectivity, the country is on the fast track towards massive digitization."

Dr Momen said registered mobile money accounts in Bangladesh are growing faster than in any other country and contributing immensely to large scale financial inclusion. Within ARF ambit we wish to contribute to the digital economy sector.

Apart from a regional crisis such as the Rohingya issue, there exist a good number of other problems which are common, said the Foreign Minister.

"Terrorism, climate change, irregular movement of people, drug trafficking, transnational crimes are some of those which can only be adequately and effectively addressed through mutual trust and cooperation underpinned by multilateral arrangements like ARF," he said.

Bangladesh will always support the ARF initiatives regarding these issues, he mentioned.

Dr Momen said Asia-Pacific is the most dynamic region in the world in terms of economic growth.

"The center of the world’s economic gravity is shifting towards this region," he said.

The main challenge of the ARF is to sustain the growth momentum but the Pandemic now is a big challenge as every economic activity has got impacted by restrictive measures and our country has also suffered, he said.

He said erratic climate changes could be a bigger challenge for them unless countries aggressively pursue their NDCs and agree on loss and damages, adaption, mitigation issues and also on `Climate migrants’ people become floating people being uprooted from their homes due to sea-level rise or river erosion.

Due to climate change, he said, the global leadership may face more serious challenges.

"Therefore, we all must walk together in collaboration and in partnership to save our planet from the upcoming `planetary emergency’."

He said they cannot look for plan B, as they have no other planet B. "We must save this planet. Let us work together to enhance the role of ARF in this trying time so that it can serve as the premier regional security forum in the Asia-Pacific region."

Pham Binh Minh, Deputy Prime Minister and Minister of Foreign Affairs of the Socialist Republic of Viet Nam and Chair of ASEAN Regional Forum, among others, joined.