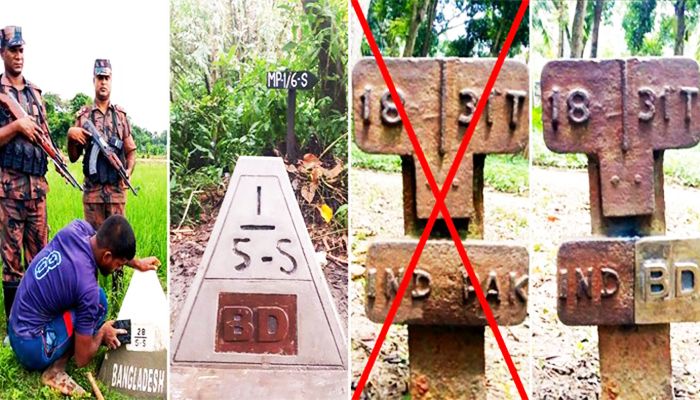 ﻿The work of inscription of ''BD / BANGLADESH'' has been completed by changing the writing “PAK / PAKISTAN” on the existing pillars on the Bangladesh-India border.

He said there were a total of 10,240 old pillars on the border, having ‘Pak’ or ‘Pakistan’ written on those pillars.

The on-duty BGB members at the border asked the concerned authority to consider converting these pillars to 'BD' or 'Bangladesh', he said, adding that later, the director-general of the BGB decided to change these names according to the concerned process.

As part of the program, BGB members have changed the 'Pak / Pakistan' to 'BD / Bangladesh' at their own initiative, he added.

Besides, construction of 315 kilometers (km) border road is under implementation with a plan to construct 815 km border road in the hilly border areas, he said, adding that the concerned authority has also received approval for constructing 73 modern composite border outposts (BOPs).

Regarding the border killings, he said the Border Guard Bangladesh (BGB) and the Border Security Force (BSF) of India’s director general-level meeting was held recently and since then no killings have taken place along the border.

He said the country has as many BGB members as it needs to protect its borders.

''The BGB's manpower has now increased and we are doing our duties with utmost sincerity,'' he added.