Rohingyas to Jeopardise Regional, Int'l Security If Not Repatriated: Dhaka 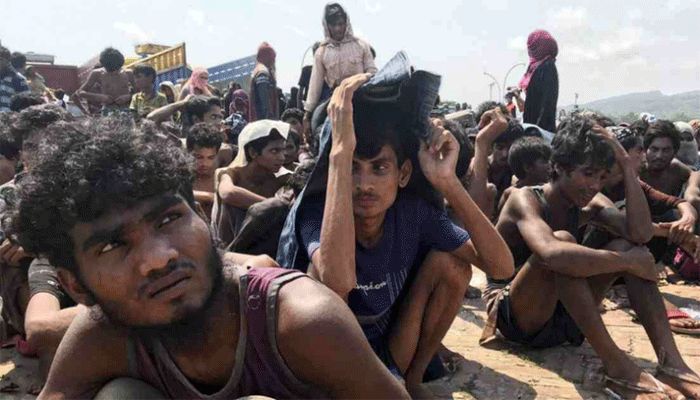 ﻿Dhaka says Rohingyas will "jeopardise regional and international security" if the 1.1 million Rohingyas are left unattended and not given the opportunity to return to their homeland in Myanmar's Rakhine State.

Bangladesh has sought a pro-active role from both the ASEAN and Thailand on the repatriation of Rohingyas, reports UNB.

Foreign Minister Dr. AK Abdul Momen discussed the matter when the outgoing Thai Ambassador Arunrung Phothong Humphreys met with him at the Ministry of Foreign Affairs on Thursday.

Dr. Momen suggested that ASEAN countries should put pressure on Burma to create a favorable environment in the Rakhine State and that the Rohingyas should be able to return immediately to their homes.

The Ambassador assured the Thai Government, as well as the ASEAN leadership, of Dhaka's concerns on the Rohingya issues and expressed the hope that this issue would soon be resolved.

A series of turf wars have taken place in the Rohingya camps in Cox's Bazar, claiming the lives of both Rohingyas and members of the host community.

For decades, the mainly Muslim ethnic minority has been subjected to state-sponsored discrimination in their homeland of Myanmar, where many of them are denied basic rights and forced to live in cramped camps.

Hundreds of thousands of them started fleeing to Bangladesh in late August 2017 after the Myanmar military launched a brutal offensive targeting the minority in the pretext of 'clearance operation'.

He said that ASEAN, in which Myanmar is also a member, has not taken any meaningful step, as there is a high level of tolerance and a lack of willingness to discuss the Rohingya crisis in ASEAN mechanisms.

Dr. Momen said that Thailand is Bangladesh's trusted friend and partner with whom Bangladesh has enjoyed a strong bilateral relationship since independence.

He noted that Thailand is an advanced economy and development hub in the Asia-Pacific region. Building physical connectivity and people-to-people contact with that country is Bangladesh's foreign policy priority, he said.

Both countries are members of different international organisations, including BIMSTEC, and there are common strategic interests on a wide range of issues, such as sustainable development , poverty alleviation, adaptation to climate change and disaster management.

Considering the popularity of Thailand as a destination for medical tourism, Dr Momen said that it would be a win-win proposition if Thai entrepreneurs set up joint venture hospitals in Bangladesh.

The Foreign Minister thanked the Ambassador for organizing special flights between Dhaka and Bangkok and for responding positively to requests for medical evacuations during the COVID-19 pandemic.

He suggested that Thailand should consider investing in special economic zones in Bangladesh, where state-of-the-art facilities and one stop services (OSS) are provided.

Ambassador Humphreys said that trade, connectivity, energy and development cooperation were key priorities of her mission in Dhaka.

She informed the Minister that a three-year development programme is in the process of implementation with funding from Thailand International Cooperation Agency (TICA).

Ambassador Humphreys indicated that she would advise her successor to organize high-level visits between the two countries once the COVID crisis has ended.

She noted that Thailand has already a significant investment presence in Bangladesh.

The outgoing Ambassador expressed the hope that the negotiators from both countries would finalize the proposed Free Trade Agreement ( FTA) and that the two countries would soon be able to sign it.

She thanked the Foreign Minister for the support she had given to her mission during her assignment in Dhaka.