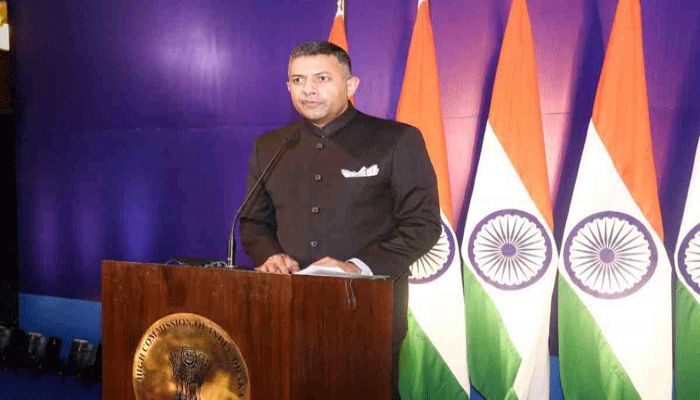 India has reiterated its commitment to completely stop killings along the Bangladesh-India border, saying that nobody wants to justify killing, reports UNB.

In his first media interaction at India House, the diplomat said that this sentiment also exists on the Indian side and shared the commitment of both countries to end the tragic incidents that have occurred most of the time at night along the border.

The High Commissioner said that this issue is essentially a question of law and order that needs to be dealt with in law and order.

At the Foreign Minister's meeting on 29 September, Bangladesh expressed its deep concern about the deaths along the Bangladesh-India border.

Dhaka and Delhi stressed the need to strengthen the effective implementation of the Coordinated Border Management Plan.

Bangladesh has pointed out that the "entire nation is deeply concerned" about the increase in the killing of Bangladeshi nationals by Indian border forces.

The Indian side agreed that the loss of civilian life at the border is a matter of concern, noting that even one death is too many.

Both sides urged the concerned border forces to enhance coordinated measures to bring down border incidents to zero.

Responding to a question, Doraiswami said India is committed to having a stronger partnership with Bangladesh on all aspects of vaccine development, including phase-III trial, co-production and delivery in a way where the Bangladesh government is comfortable with.

“We’d love to do this in a way that ensures the most affordable price. We’ll be in discussion with your government,” he said.

Doraiswami said he wants to see the completion of the connectivity projects at the earliest and ensure that it gives necessary returns to the people of Bangladesh.

He said he's going to work to make sure more Indian businesses come to Bangladesh and invest here.

In the aftermath of Covid-19, economic partnership will be important to rebuild ties, Doraiswami said.

Earlier, Bangladesh and India agreed to resolve water-sharing issues in common rivers, including Teesta, and to bring border killings to zero.

The High Commissioner arrived here on October 5 and presented his credentials to President Abdul Hamid on Thursday.