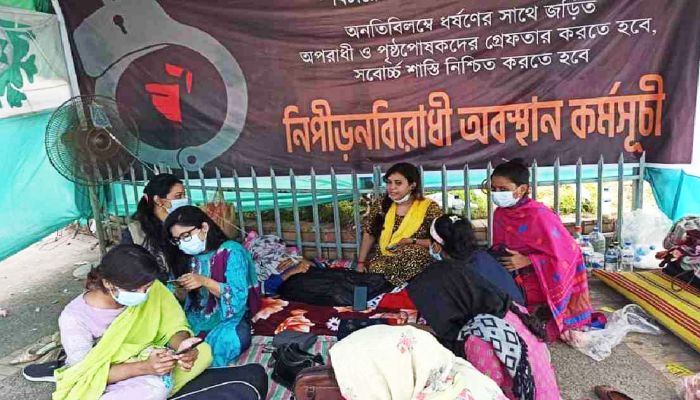 ﻿A female student of Dhaka University who started fast-unto-death on Thursday demanding the arrest of former Ducsu vice-president Nurul Haque Nur and five others in a rape case fell sick on Saturday.

On September 20, the DU student filed a case against Nur, Hasan, Nazmul Hasan Sohag and Saiful Islam, joint conveners of the platform; Nazmul Huda, vice-president of the platform and DU student Abdullah Hil Baki with Lalbagh Police Station for reportedly raping her.

The victim, a student of the Department of Islamic Studies of the university, refused to get admitted to a hospital saying that she would not leave the spot until her demands are met.

She started the hunger strike at the base of Raju Memorial Sculpture accompanied by some classmates and female activists of Chhatra League Friday night.

Jasmine Akter Rifan, an intern of Salimullah Medical College Hospital, said, "She has become weak for not having food and her condition is deteriorating fast as she vomited 11 times," said University Proctor AKM Golam Rabbani said, adding, "We're taking care of her."

''I'll continue my strike until the accused are arrested,'' she reaffirmed.

Another case was filed with Kotwali Police Station against the six on September 21 under the Women and Children Repression Prevention Act by the same student.

The leaders and activists of the two student organizations also staged separate protest rallies on Friday against the rape.