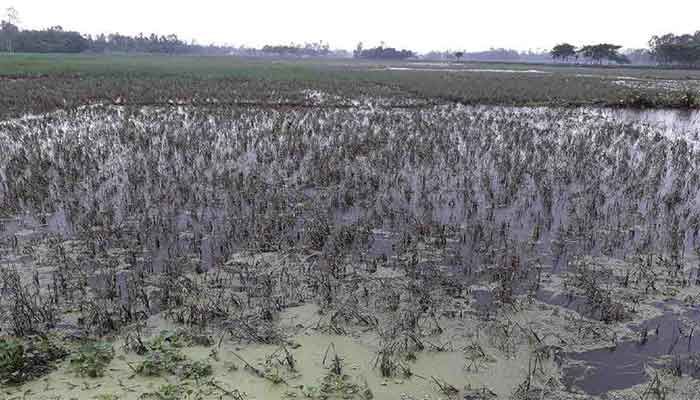 This year, farmers of five Upazilas in Lalmonirhat district have been dealt another significant blow, this time by a month of torrential rainfall, already hit hard by Covid-19 and associated constraints.

A UNB reality check revealed that the incessant showers over the past month and consequent flooding not only flattened the crops and flooded the five Upazilas' agricultural fields and roads, but also forced many to the brink of hunger.

"Under Aman cultivation, I brought two bighas of land. I was waiting for the sheaf of paddy, but my crops, my livelihood, have been ruined by torrential rainfall for over a month," said Soypal Mia, a farmer in Kaliganj Upazila's Chalbala union.

The agricultural land of Soypal is still submerged and he is struggling to drain the fields with water. "There is no potential for this land to be planted with new crops," he said.

Mufti Abul Hossain, Satbhita Dola's farmer, is also devastated. I brought 15 bighas of land for the cultivation of the aman paddy, but the rains flattened my fields. I was not able to gather straw for my cattle as fodder. How can I feed my family, and only Allah knows that?

Farmers say they will now have to employ individuals to clear rotten crops and weeds from the agricultural fields.

Take, for instance, Mintu Mia and Mozzammel Haque of Koyar Dola who have spent their entire life savings to buy land under Aman cultivation. "But our lands are under water, and now we have to shell out money to get our fields cleared of weeds," they said.

Farmers are now demanding government assistance for the worst affected.

A target was set to cultivate Aman paddy on 85,290 hectares of land in the district this year, according to the District Department of Agriculture Extension (DAE), but only 85,575 hectares could be cultivated under Aman.

But the farmers said that the number of farmers and land affected will be double the number given by the DAE.

Shamim Ashraf, deputy director of Lalmonirhat DAE, said when contacted, "Many crops, including Aman paddy, and various vegetable fields were destroyed because of the torrential rains and there is no way to plant Aman saplings on their property."

"As a result, farmers have no way to make preparations for the next Rabi crops in their fields. Anyway, we have prepared a list of affected farmers that has been sent to the Ministry and government assistance will be provided to the needy," he said.