Bangladesh Overtakes India in Per Capita GDP, According to IMF 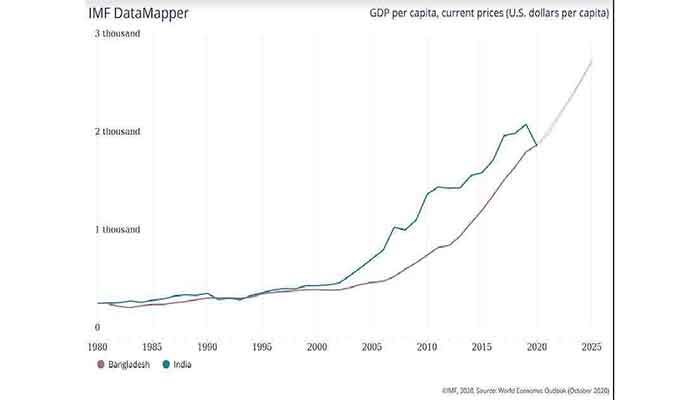 ﻿Bangladesh has overtaken its far larger per capita GDP neighbor India in 2020, owing to a respectable economic output, despite slowing expansion, coupled with a sharp contraction in the Indian economy as a result of its coronavirus lockdown.

Gross domestic product ( GDP) per capita is a global metric for calculating the wealth of nations and is used by economists to analyze a country's wealth, along with GDP, to go along with its economic heft. It is determined by splitting a country's GDP by its population, reports UNB.

India's per capita GDP, meanwhile, is forecast to drop 10.5% to $1,877, which is the lowest in the last four years. At a faster pace than its GDP, its per capita GDP dropped. For both countries, the GDP figure is at current prices.

Like several other emerging economies, the IMF's 'World Economic Outlook: A Long and Challenging Climb' published on Tuesday said that Bangladesh's gross domestic product growth decelerated to 3.8 percent in 2020, which meant fiscal 2019-20. Growth in 2021, i.e. the current fiscal 2020-21, is expected to increase to 4.4 percent.

The IMF forecast a 10.3 percent contraction for India's GDP among other South Asian countries in 2020, while Bhutan's growth is forecast to be 0.6 percent, Sri-Lanka to be -4.6 percent, Pakistan to be -0.4 percent and Nepal to remain flat. The WEO database indicates that, besides Sri Lanka, whose per capita GDP is projected to shrink by 4% in the current calendar year, the Indian economy will be the hardest affected by the pandemic in South Asia.

In South Asia, Bhutan, Sri Lanka and the Maldives still lead Bangladesh on GDP per capita, although they are much smaller economies.

The per capita GDP of India was about 40 per cent higher than that of Bangladesh until five years ago. However, Bangladesh's per capita GDP has risen at a compound annual growth rate ( CAGR) of 9.1 percent over the last five years , compared to 3.2 percent of India 's growth over that period, according to BusinessToday.in, which first recorded the switchover.