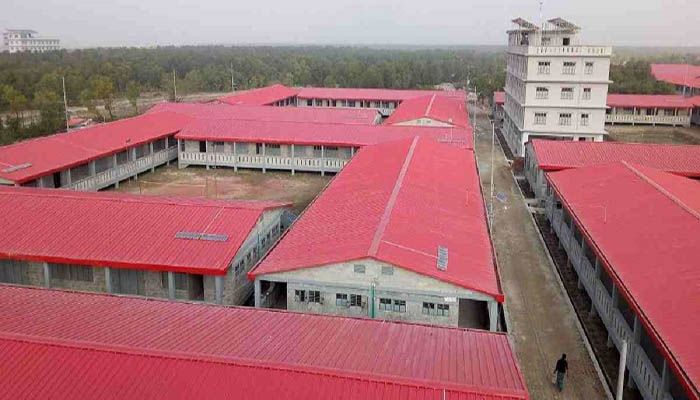 Bangladesh wants to launch the relocation of Rohingyas to Bhasan Char as soon as the government considers the weather and overall climate acceptable for such relocation, officials said.

As the weather is improving, the relocation is likely to start this month, a senior official told UNB.

No date, however, is yet set to begin the relocation of the Rohingyas to Bhasan Char, he said.

The government says that Bhasan Char is constructed in such a beautiful way with many facilities in place, and once they go there the Rohingyas will never want to return.

Bangladesh is housing, in a very congested way, over 1.1 million Rohingya in Cox's Bazar camps. Some 100,000 Rohingyas are being moved to Bhasan Char.

There are now more than 300 Rohingyas living in Bhasan Char.

He said the government wants to reduce the chance of deaths from landslides in Rohingya camps to ease the pressure on congested Cox's Bazar camps during the rainy season.

Dr. Momen said that if any Rohingya died as a result of landslides, they would all make noise saying that Bangladesh killed Rohingya. "Which is why the decision to relocate was made by Prime Minister Sheikh Hasina."

The Foreign Minister said that in Cox's Bazar camps, the Rohingya are involved in drug trafficking and trafficking in people.

But if they go to Bhasan Char, he said the Rohingyas would have the opportunity to engage in economic activity.

The Foreign Minister claimed in Rajshahi that international agencies and certain NGOs are urging Rohingya not to go to Bhasan Char.

"We believe that the Rohingya will go to Bhasan Char," he said, adding that first they will take the Rohingya to see the facilities.

Recently, many Bangladeshi media outlets visited Bhasan Char and found the facilities much better than the Cox's Bazar camps there.

Meanwhile, on Thursday, a joint letter on the topic of Bhasan Char, written to Foreign Secretary Masud Bin Momen on 21 September, was publicly issued.

Board Chair Charles Santiago of the ASEAN Parliamentarians for Human Rights (APHR) urged Bangladesh to allow Bhasan Char human rights groups to review the facilities and meet with Rohingya there.