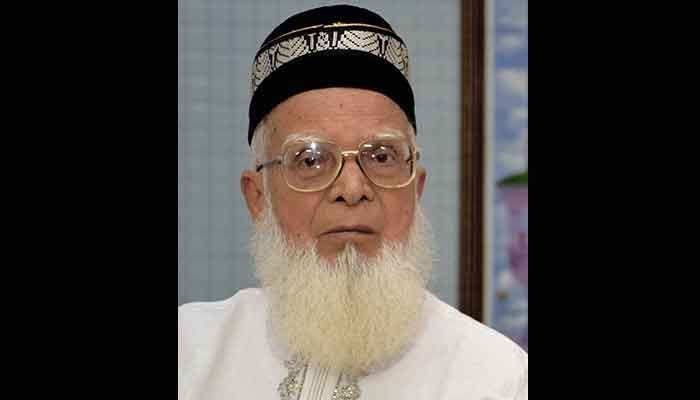 He breathed his last at around 03:00 pm this afternoon at Evercare hospital, Dhaka (Inna Lillahi wa inna ilayhi raji'un).

His first Namaz-e-Janaza will be held today after Esha prayer (07:30 pm) at Eidgah Mosque, Satmosjid Road, Dhanmondi (Road # 6A, close to Anam Rangs Plaza). The second Janaza of the deceased will be held on Wednesday (November 18) at Wazir Ali High School ground in Jhenaidah. After the Janaza, the eminent language activist will be buried in the family graveyard at Battala in Mahishakund, Jhenaidah.

Earlier he was admitted to the hospital on October 13 due to old age complications. He is survived by his wife, six sons, a daughter and grandchildren. His eldest son Md Nasser Shahrear Zahedee is the chairman of Radiant Group.

Mr. Zahid Hossian Musa was an activist during the Liberation Movement. He was also an avid writer and a great poet.

The language activist Md. Zahid Hossain Musa was born on February 2, 1932 in the village of Paikpara in Kaliganj subdivision of Jhenaidah (now district) of Jessore district. Born in British India at that time, this man grew up in Pakistan and then saw the war of liberation. This political companion of Maulana Bhasani has spent a long time in Dhaka and Calcutta.

Since the independence movement of Bangladesh, many talented politicians have visited his ancestral home in Narikelbaria, Jhenaidah. Especially Maulana Bhasani used to go to Jhenaidah and stay at his house. At that time he also had good relations with Bangabandhu Sheikh Mujibur Rahman.

The veteran politician, under the direction of Maulana Bhasani, became a candidate from Jhenaidah in the 1973 Jhenaidah sub-division when he was the President of NAP.

In his political life, he served as the General Secretary of Jhenaidah Subdivision Awami League from 1955-56. He later joined the National Awami Party.

Zahid Hossain Musa has composed innumerable songs and poems. The name of his published book is 'Onek Derite'.