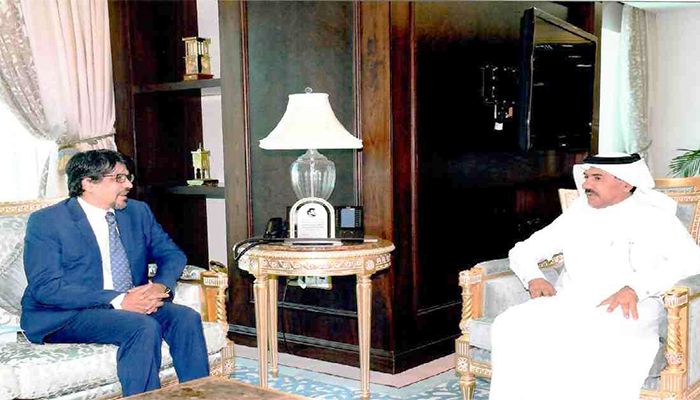 He said the presence of more than 400,000 expatriate Bangladeshis in Qatar is one of the main pillars of bilateral relations. According to government data, Bangladeshi expatriates in Qatar remitted more than $1.1 billion last year which was 6.03 percent of the total inbound remittance.

Jashim discussed the issues during a meeting with the Secretary-General (Foreign Secretary) of the Ministry of Foreign Affairs of Qatar Dr Hassan Al Hammadi on Tuesday.

The Qatari Foreign Secretary agreed with the Ambassador on strengthening trade relations, especially in terms of increasing communication between the two countries at the public and private levels and signing a Memorandum of Understanding (MoU) relating to bilateral trade.

During the meeting, various aspects of Bangladesh-Qatar bilateral relations were discussed, said the Bangladesh Embassy on Wednesday.

The Ambassador thanked Qatar for ensuring the well-being of the expatriate Bangladeshis during the pandemic.

Highlighting their contribution to the economies of the two countries, the Ambassador discussed with the Foreign Secretary various issues related to the interests of the Bangladeshi community in Qatar.

The Foreign Secretary of Qatar appreciated the contribution of Bangladeshi nationals in various fields and assured assistance in matters related to their interests.

The Ambassador emphasised the importance of recruitment of more skilled workers and professionals from Bangladesh.

He referred to his discussions in details in a meeting with the Minister of Administrative Development, Labor and Social Affairs of the State of Qatar including return of stranded expatriate Bangladeshi nationals to Qatar.

There were fruitful discussions, among others, on exchange of high-level visits, holding of the 2nd Foreign Office Consultations (FOCs) at the level of State Minister for Foreign Affairs, investment, increased cooperation between two countries in the international arena, and the Qatari government's continued support for Rohingya repatriation etc.

The meeting was attended by Ambassador Khalid Ibrahim al Hamar, Head of Asia Division of the Ministry of Foreign Affairs, State of Qatar and Md. Mahbur Rhaman, Counsellor (Political and Economic Affairs) from the Embassy.

Diplomatic relations between Qatar and Bangladesh was established on January 25, 1978.