India-Bangladesh Relations to Be Role Model 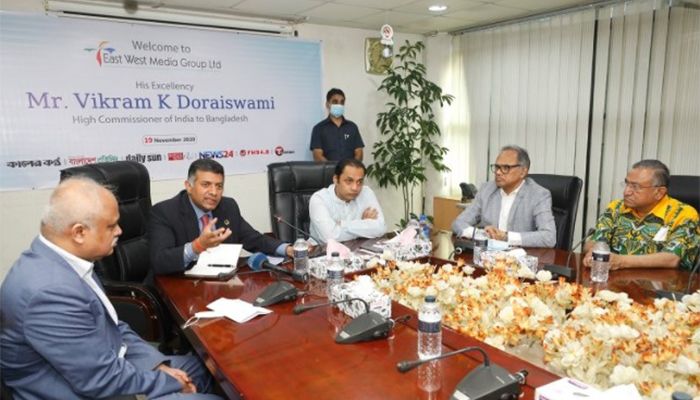 ﻿India would like to take its relations with Bangladesh to a level that will be a role model for rest of the world.

Vikram Doraiswami, the newly-appointed Indian High Commissioner to Dhaka, made the remarks while visiting East Media Group Limited, a concern of the country's largest business conglomerate Bashundhara Group, on Thursday.

India would like to see Bangladesh more prosperous to be able to undertake more joint ventures and efforts.

He termed bondage between both countries is based on history and culture, adding it is unique for India and Bangladesh to have relations  something beyond the government-to-government one.

Recalling India's support to Bangladesh in getting independence in 1971, he said the issue has cemented bilateral relations further.

About onion export to Bangladesh, he said India is exporting the product almost at low price despite shortage of the item at the local market and other hardships.

Replying to a query, he said Bangladesh will get corona vaccine on priority basis, if and when India can develop it.

Bangladesh and India are not only friends but also peaceful neighbours, he opined.

He said EWMGL visit by the Indian diplomat will pave the way for intensifying relations between media people of both the countries.