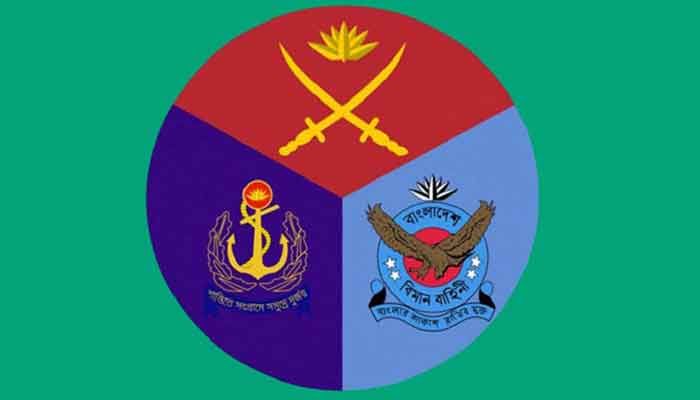 On this day in 1971, an all-out assault on the Pakistani occupying forces was launched by the Bangladesh Armed Forces, comprising the army, navy and air force.

Since the country’s independence, the day has been being observed as the Armed Forces Day every year.

The day's programme started with the offering of special prayers in mosques of all cantons, naval and air force bases across the country after the Fazr prayers, the quest for divine blessings for the welfare and prosperity of the country, and the continued growth and progress of the armed forces.

President M Abdul Hamid, also the supreme commander of the Armed Forces, and Prime Minister Sheikh Hasina issued separate messages greeting the members of the armed forces on the occasion.

The speech given by the Prime Minister on the occasion of ‘Armed Forces Day-2020’ will be aired simultaneously on private television and radio channels including Bangladesh Television at 7:30 pm today.

On behalf of the President and the Prime Minister, their Military Secretaries will lay wreaths at the ‘Shikha Anirban’ (the eternal flame) at Dhaka Cantonment on Saturday morning to pay homage to the members of the Armed Forces who sacrificed their lives during our Liberation War in 1971.

On that day the Chiefs of the three services will call on the President of the Bangabhaban and the Prime Minister of Ganabhaban on the day.

Prime Minister’s Security Affairs Adviser Major General (retd) Tarique Ahmed Siddique and Principal Staff Officer of the Armed Forces Division will be present at the meeting with the premier.

However, the authorities have agreed to celebrate this year on a small scale as a result of the global coronavirus pandemic.

Bangladesh Navy Ships (BNS) in Dhaka, Khulna, Chandpur, Barishal and Chattogram will not remain available to the general public this year.

After the Bangladesh news, Bangladesh Television broadcast the 'Special Anirban' program at 8:00 pm on Friday, highlighting the significance of Armed Forces Day.

Today at 6:30 pm, Bangladesh Betar will broadcast "Special Durbar". The 'Special Anirban' program will be broadcast in phases on private TV channels. Special supplements will be issued on the occasion of the day in various Bengali and English national dailies.