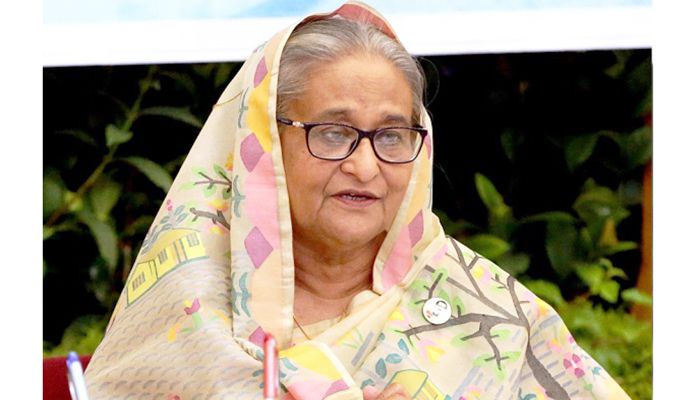 ﻿Prime Minister Sheikh Hasina on Monday asked Bangladesh Chhatra League (BCL) leaders and activists to build themselves up putting ideology of Bangabandhu in their heart, imbued with patriotism and keeping their organisation's tradition in mind to lead the country in the coming days.

"I will tell Chhatra League that you have to keep your tradition in your mind and put the ideology of Bangabandhu in your heart for building up yourselves imbued with patriotism as the future leaders of the country," she said.

The Prime Minister said this while joining the 73rd founding anniversary of BCL virtually from her official residence Ganobhaban. The programme was arranged at Krishibid Institute, Bangladesh.

She said that the BCL activists have to build themselves up as the leader of ideology so that they could advance the country in the coming days.

"You have to lead the country from the frontline, you have to build up yourselves like that way," she said.

In this connection, she reminded the BCL activists that one will be successful if that person could be groomed up with ideology.

"And if the concentration goes to wealth and money, then that person cannot be successful in life, rather that person can be indulged with luxury," she said.

Sheikh Hasina, the chief patron of the BCL, asked the leaders and activists of the organisation to inherit the ideology of the Father of the Nation and patriotism.

"BCL is one of the oldest organisations in the subcontinent, make it stronger," she said.

She said that principles of the BCL, education, peace and prosperity, should be kept in mind of all its leaders and activists.

"We give the highest priority to the education because without an educated nation we won’t achieve advancement. We'll attain peace through education, Bangladesh will be a non-communal, hunger and poverty-free developed and prosperous country. Walking the path of peace, we’ll go to the [path of] prosperity," she said.

She asked all BCL activists to remember the three principles of BCL all time.

"Without ideology, you won’t be able to give anything to the country," she said.

Talking about COVID-19, she directed all to follow the health guidelines to protect themselves from the virus.

She said that facing the COVID-19 pandemic, the government is doing whatever needed to keep country's economy running.

She said that apart from agriculture, the government is giving same importance to industrialisation as both are essential for the country.

"There might be famine across the globe due to the coronavirus. To avert famine in Bangladesh, it should be ensured that not a single inch of arable land is left empty,” she said.

In this connection, she put emphasis on the optimum utilisation of the arable lands.