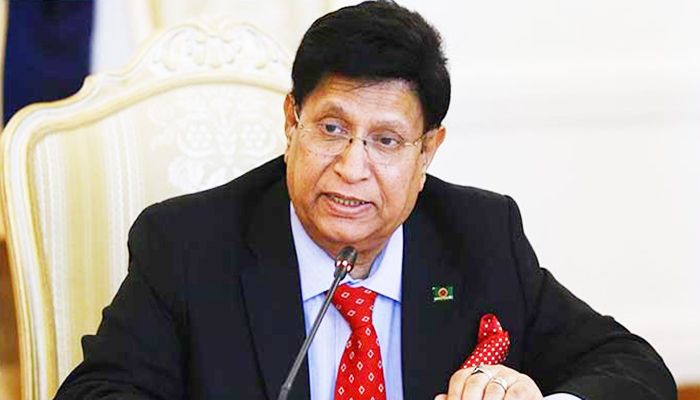 ﻿Foreign Minister Dr AK Abdul Momen on Tuesday said that Bangladesh, with its 165 million hard-working people in between two large economies like China and India, is a lucrative destination for investment.

He said the government wants to accelerate the mammoth task with greater depths in external trading, coupled with a larger inflow of foreign investment and remittance as economic growth and prosperity remains the foremost priority.

TThe Foreign Minister while addressing the opening ceremony of the 'DCCI Business Conclave-2020' said, "Keeping the economy stable, and a reduction in poverty level, creating more jobs and economic growth and prosperity remains our foremost priority."

Dr Momen said the steady growth trajectory needs to be taken to another height to graduate to be a developing country by 2024 and a developed nation by 2041.

"A sustained GDP growth of 8% would enable us to fulfill the dream of the Father of the Nation to build the 'Golden Bengal'-'Sonar Bangla'. We're confident that the vision of Prime Minister Sheikh Hasina emphasizing Economic Diplomacy and its implementation by all ministries and authorities concerned of the government will help realize this dream," he said.

Dr Momen said they have introduced Economic Diplomacy and under this package during the next few years, they expect to gain equitable market access; expansion of export basket; significant amount of inward FDI inflow; transfer of critical technologies and greater and better employment of our professionals and workers both home and abroad.

"To provide quality service, we would like to be a global manufacturing hub," he said.

But to achieve the goals of 'economic diplomacy' in addition to professional diplomats working in the Ministry of Foreign Affairs & Bangladesh missions abroad, he said they encourage business leaders, political and economic stakeholders, NGOs and even individuals to work in partnership and collaboration. "We encourage our business leaders to come up with innovative ideas and strategies."

Dr Momen said accelerating growth; reducing poverty and income inequality and establishing regional and sub-regional connectivity – from the Indian oceans across the Himalayan ranges - are the overarching goals of the current development paradigm in Bangladesh.

He said the main strategy for achieving these goals include the creation of productive employment in the manufacturing and organized service sector and increasing connectivity.

"We believe connectivity is productivity. We’re also planning to augment our skill sets to SME-level configurations in the short run and accessing skills and expertise markets in the medium-term future. We want to use the existing market forces and to leverage our potentials by using digital technologies."

He said they have established a new wing to deal and coordinate with all trade and investment issues with all relevant national authorities and ministries, including BIDA, BEZA, BEPZA and High-Tech Park Authority and to closely working with them as ''One-Government''.

"We're also planning to host a virtual business and investment platform connected to all our 78 missions. We would be happy to share our findings in the conversations that we may expect to have," Dr Momen said.

He said Bangladesh is well poised to become the 25th largest economy in the world by the year 2035.

"We've the huge potential to become an international hub for business and manufacturing hub and we would like to become global incubators for innovation and entrepreneurship," Dr Momen said.

He said Bangladesh is a ''development miracle'' in terms of sustainable GDP growth and socio-economic parameters achieved under the dynamic leadership of Prime Minister Sheikh Hasina. "From a bottomless basket, it has become a “Vibrant economy, a land of opportunity."

Even under the pandemic, Bangladesh achieved a 5.24% GDP growth rate, which is the highest in Asia, Dr Momen said.

This has been possible for the pro-business and incentive-rich initiatives and measures and relentless efforts being made by the government while creating social safety nets to allow individuals on the fringe for securing a stable income and other livelihood supports, he said.