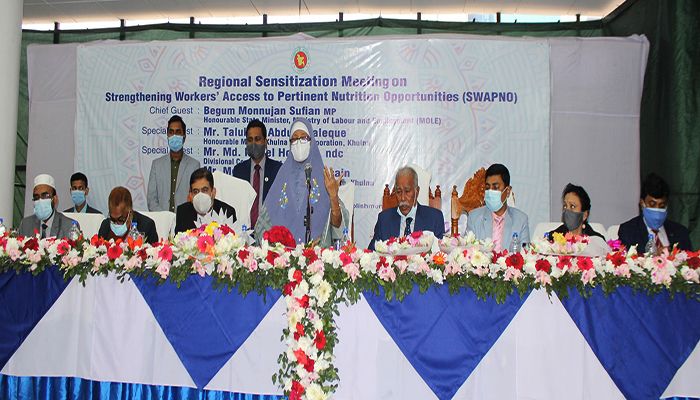 Anaemia, caused by iron deficiency among the workers, is responsible for the reduction of productivity worth five billion US dollar in South Asian countries.

Speakers at an event said a large number of our workers in different industries are suffering from malnutrition. About 43% of female workers at ready-made garments (RMG) sector are the victim of malnutrition.

Malnutrition can reduce the working capacity of workers and productivity by 20%. Hence, it is very important to implement the 'Vision 2021', and 'Vision 2041', taken up by the government, and to ensure nutritious foods for the workers for achieving Sustainable Development Goals (SDGs), they said.

In her speech, Begum Monnujan Sufian said, the government is committed to facing the challenge of malnutrition as it causes economic losses, hampering our national development.

The Minister said it is urgent to give attention to the issue of implementation of Vision 2021’, and ‘Vision 2041’, and ensuring nutritious foods for the workers for achieving SDGs.

She called for providing nutritious foods for workers at their workplaces along with raising awareness on nutrition for achieving the SDGs.

Besides, she called upon those who are engaged in production, processing, supplying and marketing of foods to consider the matter of nutrition.

The minister called upon BKMEA, BGMEA, international development organizations, businessmen and others to give their priority to the issue of improving the health and nutrition of the workers through increasing their investment in this regard.