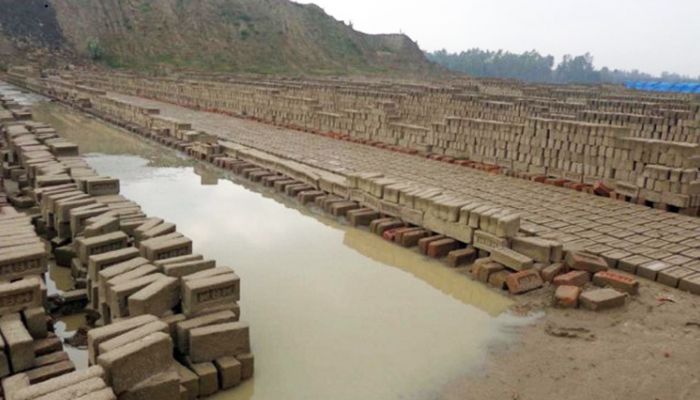 ﻿The Department of Environment (DoE) will demolish about 700 illegal brick kilns, one of the major sources of air pollution in the country.

''As air pollution has worsened during this dry season, we decided to strengthen our drive across the country to check air pollution,'' DoE director Md Ziaul Haque told journalists.

He said 30 illegal brick kilns located around Dhaka city were demolished last week as the DoE has targeted to remove 400 illegal brickfields surrounding the city.

''We will continue mobile courts in the next two or three months to demolish the illegal brick kilns across the country and about 700 brickfields are expected to be removed during the ongoing drive,'' Ziaul Haque said.

According to the DoE, there are about 7,500 brick kilns across the country and many of those have been running illegally, polluting the air and the environment.

He said two to three mobile courts of the DoE are conducting a drive against illegal brickfields aiming to check air pollution in the country.

Air quality was significantly improved in the country during the lockdown imposed due to the coronavirus pandemic. But, at the onset of the dry season, the air of the country's major cities started worsening again.

According to the data obtained from different Continuous Air Monitoring Stations (CAMS) installed in the country’s eight major cities, the air is extremely unhealthy in these cities during the dry season.

According to WHO’s air quality guidelines, the permissible level of PM2.5 is 10 µg/m3 annually and 25 µg/m3 a day (24-hour). PM2.5 is a fine particle, which is severely injurious to health.

Bangladesh had the worst air quality in the world in 2019, according to the 2019 World Air Quality Report. However, Dhaka was second-worst among capital cities.

Ziaul Haque said considering the consequences of the uncontrolled air pollution, the government has formed a high-level committee to take integrated measures in checking air pollution.

By identifying the sources of air pollution, a 22-point instruction was sent to the stakeholders concerned to this end, he said.

The agencies concerned have been asked to follow these instructions and help cut air pollution, he added.

The DoE director said the government has amended the Environment Conservation Rules, 1997 aiming to check air pollution in the construction sector and it also makes it mandatory to use blocks, instead of bricks, in all the government projects by 2025.

''Construction sector is another source of air pollution. The construction of the country's ongoing mega projects will be completed by 2022 and we hope then air quality will improve here,'' he said.