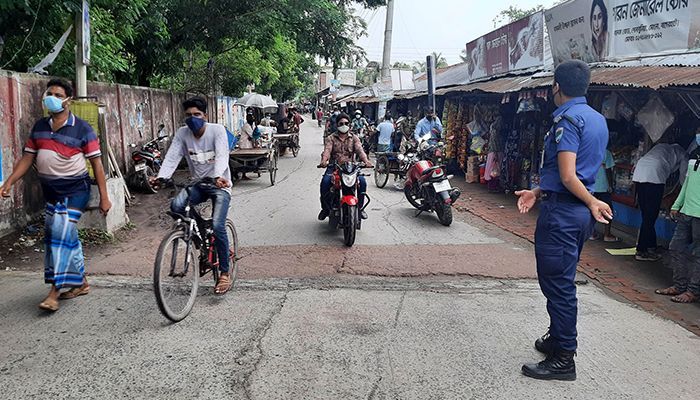 Panic is growing among the people there as coronavirus infections continue to rise in bordering districts.

﻿The number of new patients in Bangladesh has been increasing for three weeks. In contrast to the test, the rate of infection positivity is also mounting. Deaths in Covid-19 have also started to rise. Positivity rate and deaths are on the rise in the northern and southwestern district's border with India. Panic is growing among the people there as coronavirus infections continue to rise in these districts.

The Directorate General of Health Services (DGHS) has expressed concern that the Covid-19 situation may worsen this month. They say that they have found evidence of community transmission of the Delta variant, popularly known as the Indian variant, in the country.

Bordering districts have been the main area for the expansion of the Delta or Indian variant. The reason for more concern about the Indian variant is that it spreads the disease faster. The death rate is also high in these cases. The beds reserved for Covid-19 cases at the border hospital have already been filled with patients. As a result, a large number of patients are taking treatment from home. The upsurge of Delta variant of Covid-19 has been found in Rajshahi, Chapainawabganj, Dinajpur, Joypurhat, Naogaon, Kushtia, Jashore, Satkhira, Khulna, Bagerhat, Natore, Noakhali and Cox's Bazar districts. Many hospitals in these districts failed to arrange central oxygen supply and the crisis of high flow nasal cannula and intensive care unit (ICU) also noticeable.

According to media reports, the spread of the infection is increasing in 21 more bordering districts. The Covid-19 related use of telemedicine (the remote provision of clinical care) services has increased from these districts.

On May 8, the Directorate General of Health Services (DGHS) reported the detection of a new Indian type of coronavirus in the bodies of three Bangladeshis from India. From the third week of May onwards, the mass transmission in the border districts with India suddenly increased. Especially in Chapainawabganj, the infection situation is serious. In this context, the local administration announced a lockdown in the district on May 24. Over the past two weeks, the transition situation in seven bordering districts has become increasingly fragile. In this context, the complete lockdown was given in Satkhira district and area-based lockdown in seven districts. The administration has announced a one-week lockdown in Paikgachha, Natore Sadar and Singra municipalities of Khulna as the Covid-19 positivity rate is on the rise. Besides, Jashore and Abhaynagar municipalities have been brought under restrictions.

But locals say the lockdown should have been announced earlier. Infections in these areas have increased at a geometric rate since last May. Despite the demand for lockdown, no action was taken by the administration.

Although lockdowns have been imposed in several bordering districts, the actions are going on sluggishly. People are not following hygiene rules. There is no such strictness from the administration. Due to this, the risk of infection is increasing. Experts say that in addition to ensuring hygiene to control the infection, lockdowns need to be tightened in the bordering districts where the Covid-19 transmission is more prevalent. In these districts, infection detection testing and contact tracing (identification of infected persons) should be intensified. Otherwise, the situation is likely to be fragile.

Regarding the Prevention and Treatment of coronavirus infection on June 2 last year, Prime Minister Sheikh Hasina directed to set up ICU units, install ventilators and provide high levels of oxygen in every district hospital. But public health experts are blaming the negligence of the health department for not having an ICU unit at the district level so far. They see the failure of ICUs in district hospitals as an extreme failure of the health department despite the directives of the Prime Minister.

In this regard, former Vice-Chancellor of Bangabandhu Sheikh Mujib Medical University (BSMMU) Prof. Nazrul Islam said, "Where the Prime Minister has directed to set up ICUs in every district, why has the directive not been implemented even after so long? That's the ultimate failure of our health department. "

In such a situation, the government's Institute of Epidemiology Disease Control and Research (IEDCR) said on Friday (June 4th) that there has been a social expansion of the Delta or Indian variant in the country. According to the data of the organization, from May 16 to June 2, delta variants were identified in 80 percent or 40 samples by sequencing 50 samples of coronavirus infected patients from several areas of the country including Dhaka. In addition, beta variants or South African variants were identified in 16 percent or eight samples and two unfamiliar variants in the remaining 4 percent or two samples. The IEDCR called the issue "worrying" and urged people to be more vigilant.

Experts see Dhaka as the biggest hub for the spread of any disease. According to them, the Delta variant has spread to the border areas of the country, but in the same way that it reached Dhaka, it is now in a densely populated area of Dhaka and there is a big risk of rapid expansion outside Dhaka.

Experts say the way in which the number of deaths and deaths is relatively low in Dhaka is likely to change in the next two weeks. In this case, it has become urgent to prevent mass transmission and keep the hospital management ready.

Additional Director-General of the DGHS Professor Nasima Sultana said, "As per our advice, the local administration has been instructed from the highest levels of government so that no one can go to Dhaka or any other district from the bordering area." Even after that, people are coming out of these areas with various tactics. '

She said, it is difficult to stop the spread of the Delta variant in Dhaka. From here, the risk of spreading again across the country remains. Controlling a pandemic through enforcing the law is not easy in all cases unless people become more careful.