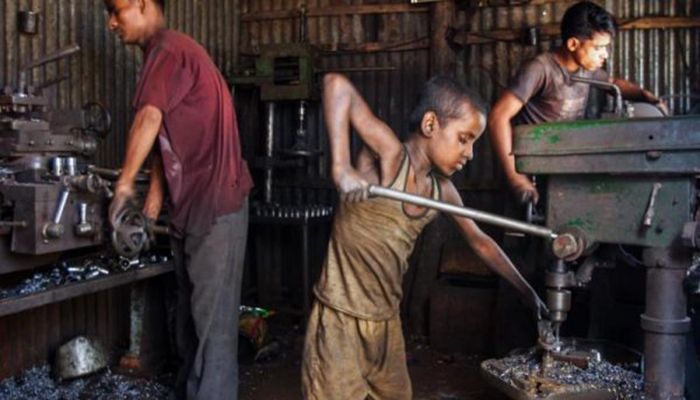 ﻿"The last two decades have seen significant strides in the fight against child labour. But the COVID-19 pandemic poses very real risks of backtracking," reports the United Nations International Labor Organization (ILO) and the United Nations Children's Fund (UNICEF). The risk of child labor has increased as the income of poor families has decreased due to the pandemic. Families can no longer afford to feed their children properly, forcing parents to send their children to work so that the family can earn some extra money. As a result, many children are dropping out of school. Not only that, child marriage is on the rise due to the stagnant situation created by the coronavirus.

However, this scenario is not only of Bangladesh but of the whole world. The United Nations (UN) says millions more children and adolescents are at risk of the same fate due to the coronavirus situation. Last Thursday (June 10), the United Nations International Labor Organization (ILO) and the United Nations Children's Fund (UNICEF) jointly released a report. There, it is said, the increased risk of the pandemic is exacerbating the situation. If immediate steps are not taken to free people from the risk of poverty, about 50 million children will be forced into child labour in the next two years.

The question may arise, why child labour is harmful? What's the impact? The impact is mental and physical. In developing countries like Bangladesh, children are mainly employed in informal sectors. There is no set time for work in these sectors, there are no restrictions on compliance with the rules, and there is no system to consider what is harmful to the child. Working in such an environment, children fall ill to various diseases at a young age Due to the fatigue of hard work, due to not having enough time, he dropped out of school.

In both rural and urban areas, 24.6 percent of children are engaged in day labour, 14 percent in sales and 25.4 percent in transport. The majority of rural child labourers are employed in the agricultural sector.

These sectors have job uncertainty, abuse, irregular wages, unspecified wages, and health risks. Even at the risk of physical, mental and sexual abuse, children have to work for a living. It is to be noted that none of these child labourers has specific employee rules. Due to this, despite being deprived, child labourers fail to realize their just demands.

There are at least ten balloon factories in Dhaka's Kamrangichar, most of which employ child labourers. The children are made to work inwards a little behind the road. They have to work morning and evening seven days a week.

The helpers of various vehicles on the roads of the capital are minors. Many children working at garages, workshops, mills, hotel-restaurant or selling cigarettes, flowers, water on the sidewalk, are living their lives on the footpath.

Concerned people said that in the capital, children are used in criminal activities like carrying drugs. Children are constantly being harassed while working as child labourers. Horrific images of domestic violence have surfaced several times in recent times.

In this context, Dhaka University Professor of Economics Saima Haque said, children, are now the ultimate victims of unemployment and poverty. "We know that the disruption of economic activity due to the coronavirus infection as a whole will increase the number of the poor and the poorest among us," he said. Many new families will be on the impoverished list. If the income of the family members decreases, then the other dependents of the family who depend on that earning person will naturally have an effect on their nutrition, education, health. And this is why child labour is on the rise now.

Abdus Sahid Mahmud, director of the Bangladesh Shishu Adhikar Forum (BSAF), said the government's efforts to eradicate child labour had been thwarted by Covid-19. He said that the epidemic situation of Covid-19 has not only increased the risk of children's vulnerability due to economic crisis and uncertainty in the country but has also created fears of increasing the number of working children in the country. It has become clear to the nation how helpless and insecure the underprivileged children, street children and working children are in the country like an epidemic like Covid-19. He said that the need for special measures for the welfare of these children has become more urgent.

Concerned people think that by employing children in child labour, their future is being destroyed because they are losing the opportunity to study while working at a young age, they are becoming mentally weak and the normal way of growing children are going out of that way They are being forced to do things that they would not normally do at their age.

According to the National Labor Act-2016 (Amended 2018), children under the age of 14 cannot be employed in any kind of work. If someone hires a child labourer, he is fined five thousand taka. But this provision is only on paper. In reality, it has no application as there is no official surveillance system.

Research Director of the Center for Policy Dialogue Dr Khandaker Golam Moazzem Hossain said the increase in child labour and child marriage is a big risk for a developing country like Bangladesh. Apart from that, this pandemic situation is depriving the children of their normal development. Coronavirus has taken away the happy moment of childhood.

Experts say a number of steps have been taken to address the growing risk of child labour. These include greater integrated social security, easier access to credit for poor families increased access to quality work for adults, labour inspections and law enforcement, the cancellation of school salaries, and various measures to ensure children's return to school.