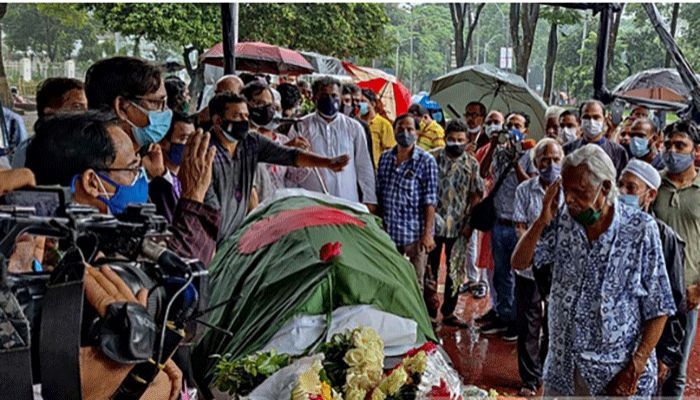 Eminent folk singer Fakir Alamgir has been laid to eternal rest at Taltola Graveyard in Dhaka.

He was buried after his last namaz-e-janaza at Khilgaon Matir Mosque in the capital after Zuhr prayers on Saturday, reports media.

Earlier, the first namaz-e-janaza of Fakir Alamgir was held this morning in the Pallima Sangsad premises in Khilgaon, Dhaka. Later, the mortal remains of the singer were taken to the Central Shaheed Minar.

He breathed his last around 10:56 pm on Friday while undergoing treatment at intensive Care Unit (ICU) of Covid unit of the United Hospital in the city at the age of 71.

The prominent singer suffered a cardiac arrest around 10pm at the Covid unit of the hospital where he was undergoing treatment for coronavirus complications while duty doctor declared him dead at 10:56pm.

Alamgir, who emerged as Gono Sangeet (the songs of the masses) singer for his outstanding contributions to inspiring the people to join the country's 1971 Liberation War, is survived by his wife and three sons.

Born in Faridpur, Fakir Alamgir started his music career in 1966 and played a vital role as a singer in 1969 uprising in the then East Pakistan.

He worked with Swadhin Bangla Betar Kendra during the Liberation War and founded the cultural organization "Wrishiz Shilpi Gosthi" in 1976. He also served as the president of Gono Sangeet Shamanya Parishad (GSSP).

As a writer, Alamgir published his first book 'Chena China' in 1984. His next two publications were Muktijuddher Smriti Bijoyer Gaan and Gono Sangeeter Otit O Bortoman.