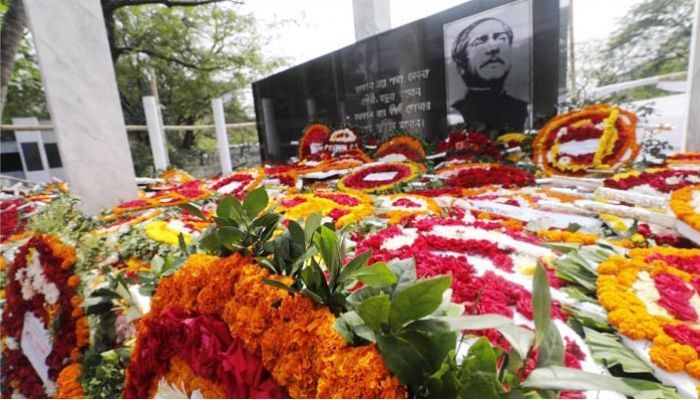 ﻿The nation today observed the National Mourning Day amid different programmes with due respect. (Photo: Collected)

﻿The nation today observed the National Mourning Day and 46th martyrdom anniversary of Father of the Nation Bangabandhu Sheikh Mujibur Rahman amid different programmes with due respect, reports BSS.

Father of the Nation Bangabandhu Sheikh Mujibur Rahman and most of his family members were brutally killed by some disgruntled army men on the fateful night of August 15, 1975 and this carnage is touted as the ugliest chapter of the nation's history.

Prime Minister Sheikh Hasina, the eldest daughter of Bangabandhu, escaped the planned assassination with her sister Sheikh Rehana as they were staying overseas then.

The government took elaborate programmes to observe the day with due respect and solemnity, maintaining health guidelines.

As part of the programme, the national flag was hoisted half-mast at the buildings of all government, semi-government, autonomous, educational institutions and private offices.

As part of the state program, the Prime Minister paid homage to the architect of the country's independence by placing wreath at the portrait of Bangabandhu in front of Bangabandhu Memorial Museum at Dhanmondi Road No 32 in the capital in the morning.

After placing wreath, the premier stood in solemn silence for some time showing profound respect to the great leader.

A smartly turned out contingent of Bangladesh Armed Forces gave a state salute at that time, while the bugle played a tune of grief and somber to the last post.

A munajat was also offered seeking eternal peace of the departed souls of the August 15 carnage.

Later, the Prime Minister visited the historic residence of Father of the Nation at Dhanmondi Road No. 32 which witnessed the world's most barbaric carnage on this day 46 years back.

Sheikh Hasina stayed in the house, which has now been turned into Bangabandhu Memorial Museum, for a while.

From Dhanmondi, the Premier later went to Banani Graveyard where her mother Bangamata Begum Fazilatunnesa Mujib, brothers Sheikh Kamal, Sheikh Jamal, and Sheikh Russel and other martyrs of August 15 were laid to eternal rest.

The Prime Minister placed wreaths and spread flower petals on their graves. She also offered Fateha and prayed for eternal peace of the departed souls of the martyrs of August 15.

Awami League General Secretary and Road Transport and Bridges Minister Obaidul Quader along with senior party leaders paid glowing tributes to Bangabandhu by placing wreaths at his portrait after the premier left the premises of Bangabandhu Memorial Museum.

A special munajat was offered on the occasion seeking eternal peace of the departed souls of Bangabandhu and his family members who embraced martyrdom on the fateful August 15 in 1975.

Besides, doa was also offered seeking overall development and progress of the country and the nation at the tough time of COVID-19 pandemic.

The President's family members, secretaries concerned to the Presidential palace, civil and military officials and employees attended the milad-mahfil and doa-munajat.

Besides, different political, social and cultural organizations also paid homage to Bangabandhu by placing wreaths at his mausoleum at Tungipara in Gopalganj.

On behalf of Prime Minister Sheikh Hasina, homage was paid to Father of the Nation Bangabandhu Sheikh Mujibur Rahman at Tungipara in Gopalganj.

On behalf of the premier, her Military Secretary Major General Naqib Ahmed Chowdhury paid tributes to Bangabandhu by placing a wreath at his shrine there.

On this occasion, a smartly-turned-out contingent drawn from three services gave a guard of honor.

PM's military secretary offered fateha and joined a special munajat seeking eternal peace of Bangabandhu and other martyrs of the August 15 carnage.

Later, the Bangabandhu Samadhi Soudha Complex was opened so that all people could pay rich tributes to Bangabandhu by maintaining social distancing.

Milad and doa-mahfil were also held at the Samadhi Soudha Complex Mosque marking the 46th martyrdom anniversary of Bangabandhu and the National Mourning Day.

Marking the day, national and party flags were kept at half mast and black flags were hoisted at all offices of the AL across the country including Bangabandhu Bhaban and party's central office.

Special munajat was offered at all mosques across the country after Johr prayers while special prayers were arranged at all temples, churches, pagodas and other places of worship at convenient time.

Free medical services were provided among poor patients at public and private hospitals across the country marking the day.

National newspapers and magazines published special supplements on the occasion.

Poster publication, its distribution and screening of documentary films on Bangabandhu were arranged while necessary measures were taken to put posters of National Mourning Day in important places including educational institutions or growth centers and those were publicized through LED display board at different public places.

In accordance with the national programmes, district and upazila administrations also drew up their respective programmes, including discussions and doa mahfils, marking the National Mourning Day maintaining the social distancing.