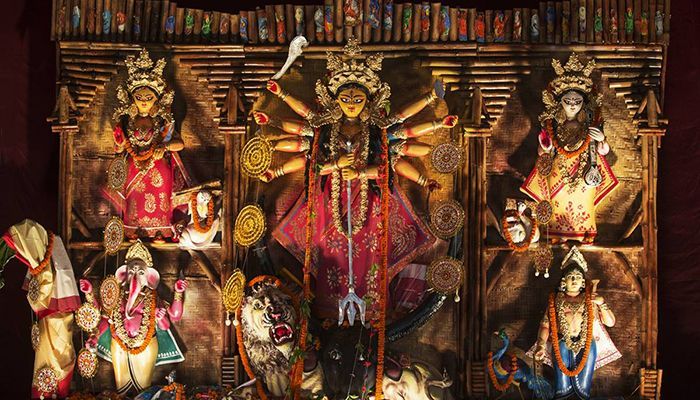 ﻿﻿﻿Durga Puja, the biggest religious festival of the Bangalee Hindu community, begins with holding Maha Shasthi puja at temples across the country amid festivity and religious fervor maintaining health guidelines.

The five-day-long Durga Puja celebration begins with the unveiling of the face of the deity and Kalparambho on the day of Maha Sashthi on that day and it will end on October 15 with the immersion of the idols.

Maha Saptami puja will be performed on October 12, Maha Ashtami on October 13 and Maha Nabami Puja on October 14 (Thursday). The Mahalaya, the auspicious occasion heralding the advent of goddess Durga, was celebrated on Wednesday last (October 6).

Bangladesh Puja Udjapan Parishad leaders urged all devotees to properly maintain health guidelines and directives were issued by the government in the wake of the global pandemic during the Durga Puja celebration.

Durga Puja signifies the birth of Durga with the blessings of gods, as collective energy, to fight the demon king Mahishasura.

Exquisitely crafted and decorated life-size clay idols of the goddess Durga depicting her slaying the demon Mahishasura are set up at temples and Durga Puja pandals.

These idols are then worshiped for five days and immersed in the river on the fifth day. The puja is performed in temples, homes and in the public, featuring temporary stage decorations.

The celebrations also include other major deities of Hinduism such as goddess Lakshmi (goddess of wealth, prosperity), Saraswati (goddess of knowledge and music), Ganesha (god of good beginnings) and Kartikeya (god of war).

Durga Puja will be celebrated at 32,118 puja mandaps across the country this year while the puja will be arranged at 238 puja mandaps in the capital Dhaka, according to the statement of Bangladesh Puja Udjapan Parishad.

Special steps would be taken, including deployment of police forces along with members of Rapid Action Battalion (RAB), Ansar-VDP and community police to ensure peaceful celebration of Durga Puja festivity, he said. (BSS)